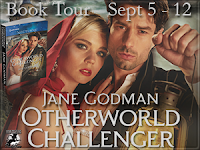 KING OF THE OTHERWORLD


The race is on to find the true heir to the faerie crown before the evil king Moncoya returns from exile. Mercenary necromancer Jethro de Loix will find the challenger to Moncoya's crown…for a price. One million mortal dollars. Outraged at Jethro's audacity, Princess Vashti, Moncoya's daughter, arranges to accompany him on his mission.


Jethro doesn't want company, especially not from Moncoya's belligerent, pampered daughter. But as their journey pits them against evil forces, their animosity soon gives way to an overwhelming physical attraction. When the trail ends on the legendary Isle of Avalon, can the pair face down the evil sorceress Morgan le Fay to claim a future they'd long denied themselves?


The words had the same effect on the assembled company as a volley of bullets fired into the ornate ceiling of the vast banquet hall. Every head turned in the direction of the man who had uttered them. Lounging back on two legs of his chair, his broad shoulders against the wall and his booted feet on the round meeting table, he returned their stares with his customary nonchalance and continued munching on an apple.


“You can’t seriously be prepared to listen to him. He’d sell his grandmother to the imps if the price was right.” The words burst from Vashti’s lips before she could stop them.


“The Crown Princess Vashti is reminded of the Alliance’s fundamental principle of respect for all species.” The condemnatory voice of the clerk echoed around the room. “Moreover, all speakers must first be approved by Merlin Caledonius, Leader of the Council.”


Vashti felt a blush of embarrassment turn the heat of rage already burning her cheeks a darker shade of red. It didn’t help that he was openly smirking at her humiliation. “I withdraw my remark.” She spoke the words stiffly.


“Thank you.” Merlin Caledonius, or Cal as he preferred to be known, inclined his head in her direction before turning to address Jethro de Loix. “What will you do exactly?”


“Exactly what you want. Find the true King of the Faeries and bring him back here to challenge Moncoya for the crown.”


A murmur of interest rippled around the table and Vashti smothered her derisive exclamation by turning it into a cough. Couldn’t any of them see Jethro de Loix for the maverick he was? Even the way he was dressed flouted convention. Everyone else around the table respected the formality of the occasion. Not Jethro. His white-linen shirt was unbuttoned a little too far, the waistcoat he wore over it hung casually open. Those long, long legs were encased in a pair of well-worn black jeans and the battered boots that rested on the conference table looked like they had walked the length of Otherworld and back. Perhaps they had. With his overlong jet-black hair tied at the nape of his neck with a leather thong and his hawklike profile he was too—her mind searched for a suitable adjective and could only come up with swashbuckling—for this solemn setting.


Jethro bit into the apple again, his teeth startlingly white against the red skin of the fruit.


Several hands were raised around the table and the clerk, a pompous little elf, noted their names in his record book. “Prince Tibor wishes to address the Council meeting.”


The vampire prince rose, bowing his head slightly in Cal’s direction. Vashti could never see Tibor without being struck by two things. His stunning physical beauty and the fact that she had never met anyone who looked less like a vampire. Stella, Cal’s wife, had once remarked that he looked like a fashion model or a Scandinavian soccer player. Vashti, with her limited knowledge of the mortal realm, had no way of knowing what the comment meant, but she didn’t think either option sounded vampire-like.


“Esteemed Council Leader, fellow Council members, our Alliance is a new and fragile one. We have taken the decision to offer our individual dynasties democracy. Our people will soon get to vote for who will lead them and represent them at this table in the future. It was a brave and noble act on our part.” Heads nodded around the table. “We believe our dynasties will vote wisely…”


Do we? Vashti risked a glance around the table. Tibor might be secure in the vampire vote—his loyal followers were not about to overturn centuries of tradition—but there were others whose places at the table were not so secure. Anwyl, the wolf leader, fought a constant battle against Nevan, a ferociously ambitious alpha newcomer who sought to usurp his place as pack leader. And, of course, there was the reason they were all here today. The problem that united them all. Daddy dearest.


“…But there is one dynasty for which we all fear the outcome. If the faeries vote to confirm Moncoya’s place as their leader, Otherworld will descend once more into chaos. My friends, I fear there will be no return to order next time.”


“Garrick wishes to address the meeting.”


The elf leader stood. “You paint a gloomy picture indeed, Prince. Yet did this Council not, at its first meeting, request that Merlin Caledonius issue a warrant for the arrest of Moncoya as a war criminal for acts of barbarity against his own people? There is still time to do that. Then, should he attempt to return and take his place as leader of the faeries, surely his reign would be short lived? Not only would he face imprisonment, if he is found guilty it is likely he would be executed for his crimes. Even Moncoya’s arrogance would not lead him to take such a step.”


Cal cast an apologetic glance in Vashti’s direction. He knew how hard it was for her to listen to accounts of her father’s atrocities and maintain an outwardly impervious manner. “I am reluctant to take such a step at this stage. Although the battle for control of Otherworld drove Moncoya into hiding, it did not topple him from his throne. He is still the King of the Faeries and there are many who wish to see him return openly. If the faeries elect Moncoya as their leader, we will have to tread carefully. The fae population is one of the largest in Otherworld. We cannot risk alienating them by taking an inflammatory action against the leader they choose. If they choose him. Princess Vashti, perhaps you can aid this discussion by telling the Council the mood of your people?”


Cal had warned her in advance that he would ask her this question today. Rising, she was conscious of all eyes upon her. So why did the intense gaze of Jethro de Loix, who wasn’t even part of this Council, bother her more than any other? “I wish I could give my fellow Alliance members a definitive answer to that question. Sadly, I cannot. If the faeries were asked to vote tomorrow, indications are there would be an even split with half voting for Moncoya—” she had schooled herself not to refer to him as ‘my father’ in this setting “—and half evenly split between the other opposition parties.”


Prince Tibor raised his hand. “The princess’s words raise the real possibility of Moncoya taking his seat at this table in the near future.”


The clerk gestured to Anwyl the Wolf. “I will not be part of an Alliance that includes Moncoya.” Several heads around the table nodded in agreement.


So it begins. Moncoya’s return would destroy all the good work they had done. Otherworld would descend once more into the constant battles that had threatened to tear it apart before the Alliance had been formed. Vashti met Cal’s eyes briefly and she knew he was thinking the same thing. “Anwyl, the sentiments you express are the reason why it is so important for us to find the true heir to King Ivo, the faerie leader who was killed by Moncoya in the bloody coup through which he seized power. The current opposition parties, all well-meaning, do not offer the faerie race a viable alternative to Moncoya’s strong rule. King Ivo was deeply loved by his people. If we can produce his heir, I believe that will sway their vote.”


Anwyl, still on his feet, looked skeptical. “What proof do we have that this so-called heir even exists?”


“We have the word of the leader of the Dominion, the fourth choir of angels. We also know that the Goddesses of Fate summoned Princess Vashti’s sister, Tanzi, to them at the palace of Gladsheim recently and spoke to her of the true heir. Our biggest problem lies in the fact that the identity of the heir has been so well hidden he himself is unaware of it. The goddesses told Tanzi that the answer lies on the Isle of Avalon.”


The clerk cleared his throat in preparation for another reminder about respect, but Cal spoke before he could intervene. “While that may be true, the goddesses are not able to lie. If we are to find the heir, someone must go to Avalon in search of him. It is a journey that is both perilous and unprecedented. We have only one offer to make the attempt. That offer has come from Jethro.”


Everyone in the room knew Prince Tibor hated Jethro and had sworn to kill him for the perceived crime of stealing the vampire leader’s human servant from him. Even so, the prince’s words, when he turned to speak to the necromancer, were polite. “You would do this? Knowing the dangers, you would be prepared to go to Avalon in search of the faerie heir?”


Jethro’s smile—the piratical one, the one Vashti loathed with every fiber of her being—dawned. “For the right price.”


“And what is that price?” Cal’s voice was razor-sharp. As the Council leader, he was scrupulously fair. He would offer no favors just because Jethro was a fellow necromancer and a close friend.


In 2017, Jane has a new paranormal romance series coming from SMP Swerve. Watch out for her hot Arctic werewolves!