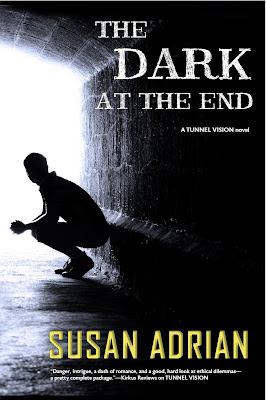 Jake thinks he has only one more step and he’ll be free: he has to get the serum to stop his ability to tunnel—to find and control people through objects. But Jake’s contact has been killed, and there's no sign of the serum. Then Jake’s mom and little sister Myka are kidnapped, right under his nose. With the government, his power-mad father, and the terrifying Mr. Smith all after him while he still has his power, he doesn’t have anywhere to turn.

What will Jake do to get his mom and little sister back?

Guest Post for The Dark at the End By Susan Adrian


THE DARK AT THE END was my first time writing a sequel—and I have to say, it was a lot harder than I thought it would be. Coming off of it feels a bit like the day after you have a baby, and you swear you will NEVER do that again. I might do that again, but not for a while!


I thought going in that it would be easier. I already knew the characters so well! And the world was mine. All I had to do was go back in and play for a while, right?


Since this is also the final book in the series, the struggle was to make sure that I did right by all the characters, that I wrapped up all the threads appropriately in a satisfying way. I also took it a step further this time, and added two points of view: Rachel, Jake's love interest, and Myka, his twelve-year-old sister. In the first book, Jake was isolated for a lot of the time, quite literally, but in DARK his world has expanded, and it was important to capture those other stories. It was a challenge to balance three points of view, and three stories that all intertwined.


So those were the struggles. But as with all things, there were good parts as well, and I believe in celebrating the good parts.


--I love this world so much, and I got to stay in it a bit longer. Jake's story is dark, and sometimes violent, but it is also fascinating to explore the intricacies of what happens when super powers and the government collide. I tried very hard to keep in mind why the "bad guys" were acting as they did. It always made sense to them.


--I love the characters. I said on tour for the first book that somehow I had an 18-year-old boy inside me, and I still do. It feels natural to write Jake particularly. And so, so fun.


--I got to end the story the way I wanted. I originally had a three-book arc in mind, but ended up streamlining it to two complete books. I really wanted to leave Jake, Rachel, Myka, and the rest in a particular place, and I'm so happy I got to do that.


I hope the readers of TUNNEL VISION will be as happy as I am!

About the Author
Susan Adrian is a 4th-generation Californian who somehow stumbled into living in Montana. In the past she danced in a ballet company and worked in the fields of exotic pet-sitting, clothes-schlepping, and bookstore management. She’s settled in, mostly, as a scientific editor. When she’s not with her family, she keeps busy researching spy stuff, learning Russian, traveling, and writing more books.