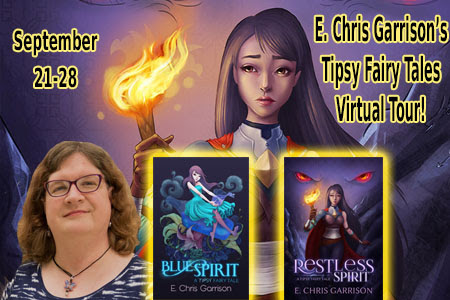 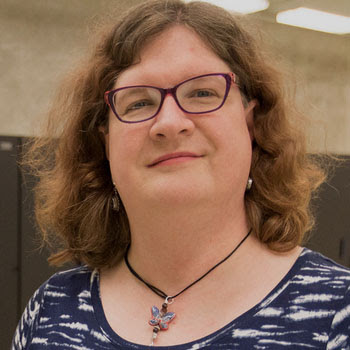 About the author: E. Chris Garrison writes fantasy and science fiction novels and short stories. She used to publish as Eric Garrison, but has since upgraded. Her latest series is Trans-Continental, a steampunk adventure with a transgender woman as its protagonist. Chris’s supernatural fantasy stories include the Road Ghosts trilogy and the Tipsy Fairy Tales published by Seventh Star Press. These novels are humorous supernatural fantasies, dealing with ghosts, demonic possession, and sinister fairy folk. Her novel, Reality Check, is a science fiction adventure released by Hydra Publications. Reality Check reached #1 in Science Fiction on Amazon.com during a promotion in July 2013. Chris lives in Indianapolis, Indiana, with her wife, step-daughter and cats. She also enjoys gaming, home brewing beer, and finding innovative uses for duct tape. 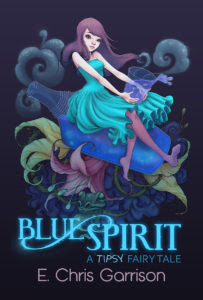 Book Synopsis for Blue Spirit: Gamer girl Skye MacLeod can see fairies, but only when she’s tipsy. More Grimm than enchanting, some of these fairies are out to ruin her life, wreaking havoc with her job, her home, and her relationships. With the help of her tiny fairy friend Minnie, Skye has to protect her vampire wannabe gamer friends from all-too-real supernatural threats only she can see. Can she keep it together and hold fast against a wicked fairy Queen’s plot? Blue Spirit is the first book of A Tipsy Fairy Tale series! 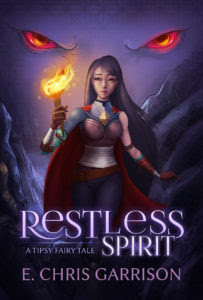 Book Synopsis for Restless Spirit: When Skye McLeod is asked by her pal Phil Jenson if she wants to cosplay at his game company’s booth during Big Con Weekend—and get paid for it—she jumps at the chance. Besides, Skye’s hit a rocky patch with her girlfriend Annabelle, who wants her to stop drinking and act more responsibly. Then Skye gets a call from paranormal detective Rebecca Burton for another job; something big is going on at the convention, and she needs Skye to be her eyes and ears there. So now Skye’s getting paid to have fun—twice! Then The Night Duke, a creep from Skye’s live role playing days, shows up and uses some weird mojo, seemingly turning pretend zombies into real ones. After barely escaping an attack, Skye learns the fairies and trolls within the magical realm are getting restless, and her old friend, the Transit King, is in the middle of it. Skye decides to once again enlist the aid of her fairy companion “Minnie.” For Skye to enter the magic realm, she needs to get tipsy. Then she’ll just have to control the powers within her and contain the outside forces that threaten to spin into chaos. How can she possibly screw this up? Book Two of the Tipsy Fairy Tales Trilogy


Games bring people together, and for introverts, they provide structured socializing. Clear turns and rules to follow make interactions easier among new acquaintances at a party, for example. A game gives everyone a  common focus. They're also the focus of conventions, massive gathering of people who like to play games and be social.

So for the Top Ten List I've been asked to do, I've had games on my mind, since my Tipsy Fairy Tales stars a gamer girl named Skye, and my latest book in that series, Restless Spirit is set at a ginormous game convention. Let's get to the list!

While I like train games, many of them such as Mayfair Games' Empire Builder and British Rails take many hours to play through. And that's fine if everyone's down for that, but often at a party, attentions wander, and at conventions time can be precious to fit in many events.

Rio Grande Games' Trans America can play out a round in only 5-10 minutes, and a full game in 20-30 minutes. The game play is fast, as each turn every player just lays down two pieces of track to connect the five cities they draw, one from each color region of the map. First one to connect all five wins. It is very simple, but the complexity comes in with the choices players make in which lines they focus on, possibly delaying the other players from connecting their cities. In my home, this is a favorite game.

Okay, so this is another train-themed game. Like Trans America, the tracks in Ticket to Ride (Days of Wonder) are filled in by players on their turns. Except in Ticket to Ride, the tracks are color coded, and players draw different colored cards from a deck and must have the same number of cards of the same color of the segments of the track they wish to run. Strategy is somewhat more complex, and game play a bit longer at 30-60 minutes, but I have had a lot of fun playing this at conventions, and plan to introduce my family to it soon.

I bought this game in a paper envelope for $6 in the 90s sometime. It had a black-and-white cardstock map of mansion, playing cards you cut out yourself, and asked you to supply your own tokens to represent the players. It was an instant hit. I said at the time that Kill Doctor Lucky (Cheapass Games) was the opposite of Clue in that instead of solving a murder, you're plotting to commit one. Since then, Cheapass Games (and more recently, Paizo) has put out fancier versions with an actual full color cardboard playing board and glossy printed cards and playing pieces. It's a very fun, fast-playing game with a sense of humor and a unique game mechanic that has would-be murderers chasing the old Doctor around the mansion with various weapons, hoping to catch him alone, with no one watching. Because if you don't do it, someone else will.

Steve Jackson Games' Munchkin has more themed versions out there than anything other than any game butMonopoly. There's Star Munchkin, Zombie Munchkin, Cthulhu Munchkin… It goes on and on, but whichever genre you pick, the game is pretty much the same: kill monsters, take their stuff, and mess with your friends. Whether you like the gameplay or not, the artwork by Dork Tower's John Kovalic is hilarious. It's a card based game that can take an hour or two to play, with each player's character getting built up more and more, only to be knocked down by monsters or cutthroat competition.


Magic: the Gathering (Wizards of the Coast / Hasbro) invented the collectible card game. It caught fire in the early 90s and consumed the gaming industry. Gen Con (which Big Con is loosely based on) started as wargaming con, then was taken over by Dungeons & Dragons for years, and while those were still important, CCGs took over every flat surface and evolved into a very serious tournament event. Some people spend vast amounts of time and money building creative and competitive decks to defeat others. This is a deep game, with staggering amounts of strategy and calculated odds. I have never been very good at Magic, but have had fun with it. Today, I don't know if I'd even recognize the cards anymore, nor the variations in rules that have been added to the game. Still, it continues to be a perennial favorite, especially at game conventions.

Euro Games Formula De' is a racing simulation board game that actually includes shifting gears, car damage, pitting, except done with various polyhedral dice and chits. The track is full of sharp turns, and if you're daring and lucky, you can tap once in them and go, but if you go too fast or land just wrong, you can damage your car by overshooting or get in a collision with another player's car. It's really pretty exciting, especially if you like auto racing at all. It can be a couple hours per race, but there's never a dull moment.


Evo, also published by Euro Games, is an oddly fatalistic game of dinosaur evolution and extinction. Players bid on special chits drawn each turn in order to level up their dinos to be faster, more resistant to heat and/or cold (the climate is ever changing), better able to attack and defend themselves, and reproduce faster. It is a beautifully made, funny game with any number of strategies. Games last about an hour. Highly recommended!

This classic game of world conquest has been around for ages. My family used to play every Thanksgiving or Christmas when the cousins would get together. Most games do end up dragging on as players' armies ebb and flow across the continents, gaining ever greater reinforcements toward the end of the game. Some rules variants can even this out, and tricky player alliances can make or break an empire (beware flipped boards when someone betrays someone else!). Excellent game for a long lazy day, or an evening with beer and snacks.


What I love about this game is the constant interaction. Even if it's someone else's turn, you can gain resources. Players of Mayfair Games's Settlers of Catan each grow little empires through building and expansion, rather than warfare. They compete for resources, cooperate through trades, and try to get whatever edge they can to win the game. It is easy to learn, and games play out in under an hour. It's easy to see why this one has been so popular.


I have been playing the world's most popular roleplaying game since about 1978. Featured in the Netflix hit show, Stranger Things, D&D is a decades-old favorite among teens, college students, and those same players when they grow into adulthood and have families. D&D is storytelling, it's wargaming, it's hardbound books of rules and slinging dice. It's imagination… it's quality time with friends around a table, getting to be a fantasy character for a few hours. Ask any D&D player about their characters and they will talk your ear off with war stories and character history outside of the game.


This is the game that brought me to my first game convention, and it's brought me back again yearly for 30 years. Which is why I chose a huge game convention as the setting for Restless Spirit, to put into my story some of the love I have for tabletop gaming.