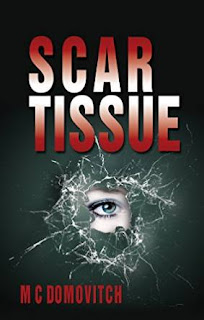 When successful model Ciara Cain wakes up in hospital, remembering nothing of the weeks she has been missing, her only clues are the ugly words carved into her skin. According to the police she was a victim of the Cutter, a serial killer who has already murdered three women. For her protection the police and her doctors give a press conference, announcing that because her amnesia is organically caused, her memory loss is permanent. But, whether her memory returns or not is anybody’s guess.
Overnight, Ciara’s glamorous life is gone. Her scars have killed both her modelling career and her relationship with her rich boyfriend. With nothing to keep her in New York, she returns to her home town of Seattle, moves in with her sister and goes about building a new life. But when her sister lets it slip that Ciara’s memory is returning, the killer comes after her again. If Ciara is to stay alive, she must keep one step ahead of the Cutter. 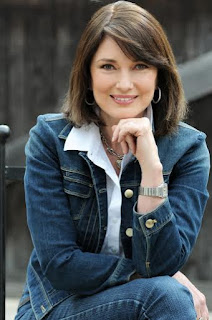 M C Domovitch is the author of nine novels, four of which were published under the name of Carol Ann Martin (by Penguin), another two under the name Monique Domovitch (by Carina Press) The other three are published as M C Domovitch, Scorpio Rising, The Sting of the Scorpio (Both now republished in one single tome) and Scar Tissue. The decision to use a different pen name was based on her departure from cozy mysteries and entering the Romance and Romantic Suspense genres.
Before becoming an author, Monique had multiple careers, beginning with modeling. She won a modeling contest in the 70s and became one of Canada's top models. After retiring from the fashion industry, she studied finance and joined an investment company. This led to a new career as host of her own television show about investing, with the television network, WTN. Following her retirement from finance, she decided to pursue her true passion, writing. At a writing workshop at San Diego's Writers' Conference, one of her unpublished books caught the eye of a publisher and of an agent. And the rest, as they say, is history.

Domovitch lives with her physician husband and their dogs. They divide their time between homes in Victoria and Toronto Canada and Key Largo Florida.

For More Information
My review;

Caira Cain is a model. But, for weeks no one has known where she has been. She has finally shown up without any memory of how or why she is in the position she is in. Now she  has no idea who has done horrible cutting on her face and has left her with terrible words in her skin. The police think that the same person who has killed 3 other women has tried to kill her. Caira has a lot of people around her that are trying to keep her safe so it is announced that she has no memory at all about what happened to her. Caira decides to go stay with her sister to live and wants to be safe. The killer though finds her and is after her again. Will he catch up to her and kill her? Will she be able to find out who he is ? Will she ever have any future and ever be able to live her life again? This books is full of action and will keep you glued to the pages until you get to the end.  I give this book a 5/5. I was given this book for a review and all opinions are mine.
Posted by 3 Partners in Shopping at 12:08 AM