Summary from Goodreads:Gunhild is a private in the Royal Army. She’s headstrong and reckless, but she’s also the best troll hunter in the country, and when a troll gets away with a national treasure, she’s the only person with any chance of getting it back.

Kirabo was on his way home to Aberash after a fulfilled research mission, but he managed to enter the wrong coordinates into his spaceship. Now he and his PA robot are stranded on a far-off planet, and they don’t have enough fuel to get back home.

As genres collide on Troll Island, Earth, the troll hunter and the space explorer have to overcome their differences and work together if they want to survive this fairytale. 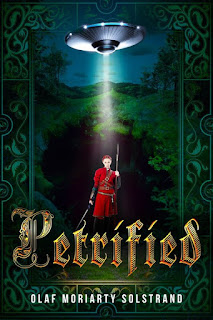 
Olaf Moriarty Solstrand (1982-) is a Norwegian writer and librarian, currently living in Ski, Akershus with two lovebirds, one wife and a hyperactive Twitter account.

Since 2001, he has written scripts for more than sixty Donald Duck comics, and his stories have been published in 29 countries. His first novel, Trolløya, was self-published in 2013.

In 2010 he received the Raptus Award for the work he's done for Norwegian comics.