Once Crazaniak convinces Shannon she needs his protection, they partner to unearth secrets her husband left behind—secrets involving a Tanzanian mine that yields perfect blue diamonds coveted by dealers around the world—secrets connected to a terrorist leader Crazanaik has vowed to take down.

With danger surrounding them, two emotionally wounded souls bond, but can they put their demons to rest and trust in love? Can they survive long enough to find out? 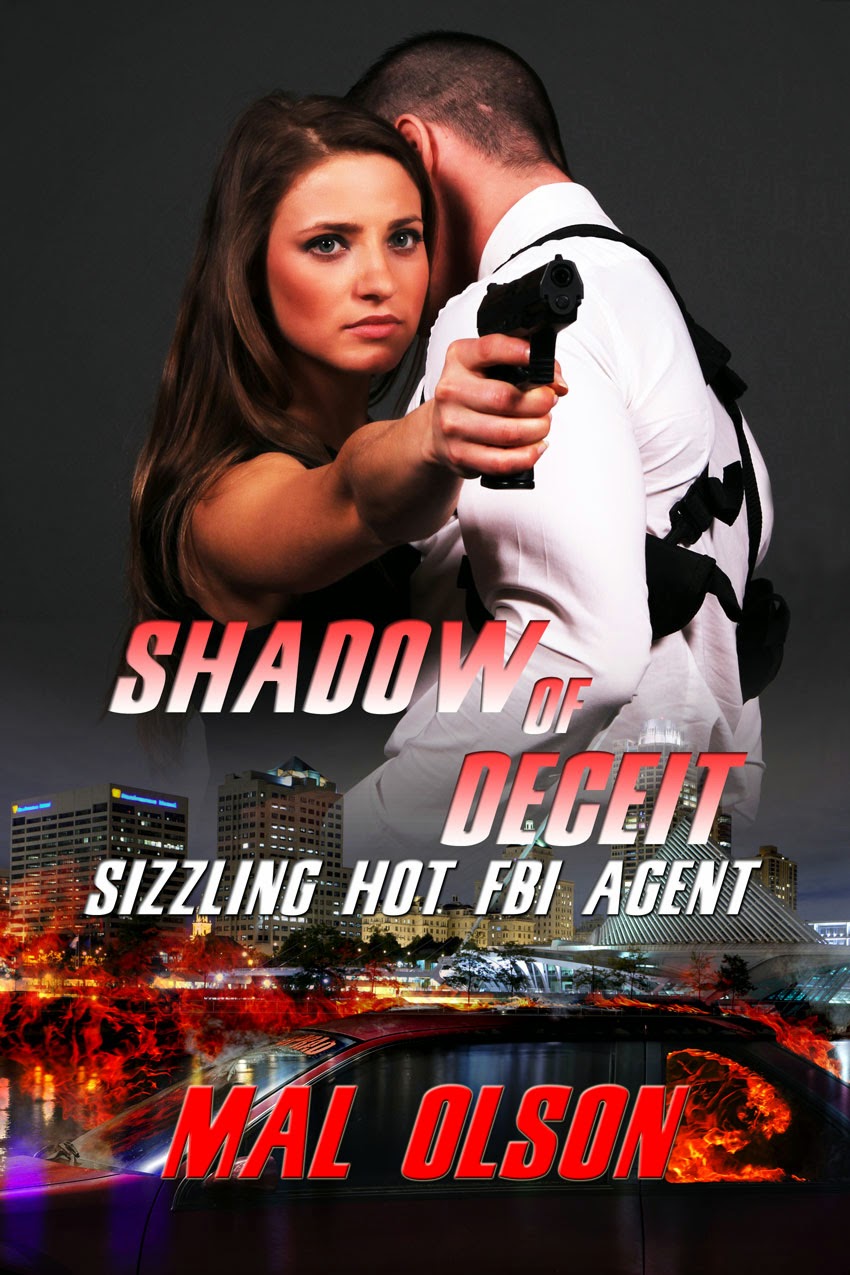 
Mal Olson writes adrenaline kicked romantic suspense. She enjoys skydiving, ski jumping, SCUBA, hang gliding, big wave surfing, car racing, mountain climbing—that is, vicariously through her characters, who are always kick-ass, and often boss her around rather than allowing her to spin her stories the way she intends. (She did, however, personally engage in zip lining this past summer.) Her debut novel Shadow of Deceit, released by The Wild Rose Press in 2012, is an edge of the seat romantic suspense-thriller set in Milwaukee and parts of northern Wisconsin. A couple of her favorite reviews came from Beverly at The Wormhole, who said, "Wow! This one has it all! Non-stop action, hot and sexy characters, betrayal, smokin' romance, and a thrilling plot--" and Gothic Mom's Book Review, which stated, "In the 150+ books that I read per year, there are very few that receive a five star rating. Shadow of Deceit did just that. Non stop action, sexual tension, an adventure that had me on the edge of my seat...A fantastic book that had me from page one..."


Olson also offers two short stories. Danger Zone, which has spent months in the Kindle top 100 free romantic suspense category, is a guaranteed fifteen minute pulse pounder where two strangers survive a rock 'n roll landing on an icy Milwaukee runway and chase a could-be terrorist into the danger zone. Me and Brad, a feel good romance, features an irresistible K-9 and was ranked in the Kindle free top 100 list for months in the Contemporary Romance category.


Five minutes after Shannon's houseguest headed for the shower, she meandered down the hallway and hesitated before knocking on the bedroom door.


"Hey, Crazaniak, you want me to send your shirt and Jockeys through a quick cycle in the washer and dryer?" And how about sending your pants and jacket out to the cleaners? She rolled her eyes, knowing she had no intention of doing any such thing, or of actually meeting a crazed gunman alone. Maybe she could convince Crazaniak to lurk in the background while she interviewed the Hulk and pushed for more information about his claimed connection with Tyler.

Meanwhile, the only reply from Crazaniak's neck of the woods was the sound of water flowing noisily through the pipes. Since she'd already decided it would be a nice gesture to "tidy his whiteys," she turned the knob and tentatively stepped in. It was her bedroom.


The gun she came across at the bottom of a neatly folded stack of masculine attire on her bed shouldn't have surprised her. She'd seen the Glock earlier. Intrigued, she reached for the pistol, an object that seemed so out of place in her bedroom. As though she were familiar with handling firearms when she wasn't, she wrapped her hand around the grip then jerked her head toward the bathroom door, conjuring up thriller fantasies.


But she didn't have to conjure anything when she noticed a letter poking out of his inside jacket pocket. Nor did she have to imagine the fact that the closet door stood slightly ajar. Her stomach clenched, a mix of anger and unease. Had the FBI agent been nosing through Tyler's belongings?


Tit for tat--the urge to sneak a peek overwhelmed her. Her heartbeat ratcheted up as she shifted the gun to her left hand and reached for the letter.

At that instant, she sensed a presence behind her.


Even as the sound of water pounded the walls of the tub enclosure, Shannon knew in her heart of hearts that six-foot-plus of dripping wet, naked man stood not relaxing under the water jets, but hovering five heart-palpitating feet away.


"Want to toss me my clothes?" he asked.


Unwilling to face him, she remained quick-frozen like a pillar of salt.


"Tell me you weren't snooping in my things," he rumbled.


"Tell me you weren't snooping in my closet."


She eyed the edge of the letter. "I thought I'd treat your duds to some suds. You want to hang out in my robe for a few?"


"Not enough material there to cover my manly attributes. I'll settle for day-old Jockeys, and what the hell were you going to do with my pistol?"


"Nothing." She almost turned around.


Her chest thumped. The thought of Crazaniak au natural not only spiked her pulse, it titillated her imagination. She waited for a chord of guilt to strum across her heart. It didn't happen. Instead, discord fluttered low in her abdomen, and she sensed him moving closer.


(FIVE Kindle Copies of TOO SEXY FOR HIS STETSON) a Rafflecopter giveaway
Posted by 3 Partners in Shopping at 12:31 AM