Beyond The Veil
The Veil Series
Book 1
Pippa DaCosta 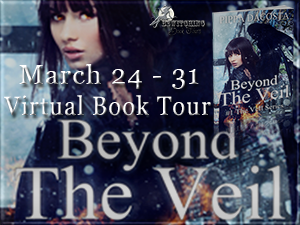 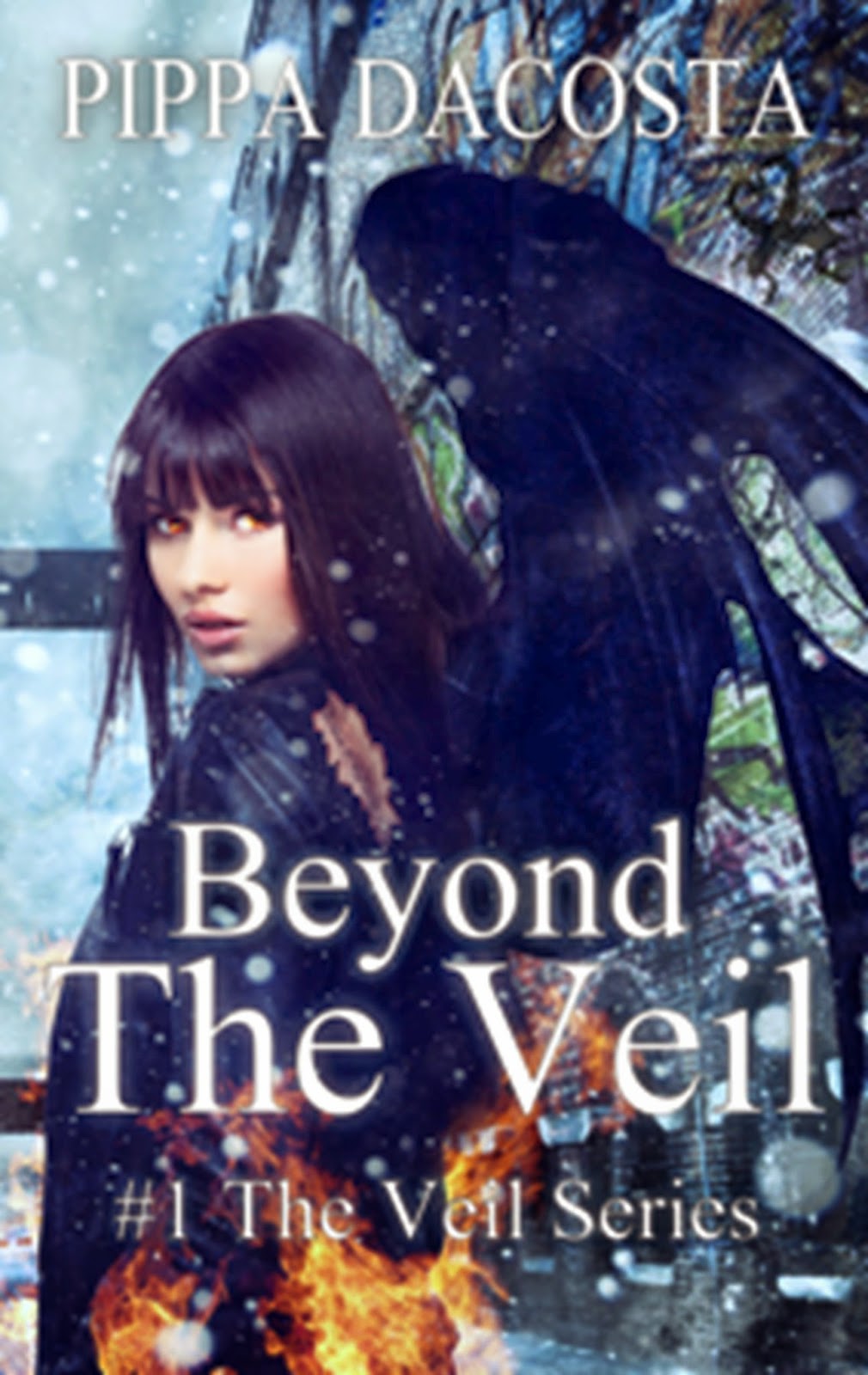 “They say I’m half demon, but I like to think of myself as half human, especially as the demons want me dead.”

Charlie Henderson is living a lie. Her real name is Muse and her attempt at a normal life is about to go up in smoke.

When a half-demon assassin walks into her life, leaving a trail of destruction in his wake, Muse must return to the one man she hoped never to see again and ask for help. The Prince of Greed isn’t known for his charity. The price is high, but the cost could tear her apart.

Trapped between the malevolent intentions of a Prince of Hell, an assassin with ulterior motives, and all of demon-kind, Muse must embrace the lure of chaos at her core; the demon inside her, in order to survive.


When your ex is the Prince of Greed, you'd better be ready to raise hell.


I should have known he’d be trouble as soon as he walked into my workshop, but I couldn’t have known he’d be the death of me. He wore a three-quarter length red leather coat, had platinum blond hair long enough to sweep back out of his eyes, and sported scuffed Timberland boots, but if the goose bumps shivering across my skin were anything to go by, he clearly was not as human as his appearance had me believe.


At first, I tried to ignore him, refusing to give him the satisfaction of seeing me hesitate. A quick glance at my dusty clock told me it was late, past midnight, and I’d be damned if I was going to drop everything just because he’d invited himself in. I continued to work on the sword resting on the anvil before me. I hammered out imperfections in the blade’s surface with renewed vigor, metal singing at each blow. Behind me, the coal forge roared. Rolling waves of heat branded my back. I told myself it was sweltering temperatures sprinkling perspiration across my face and back, making my scruffy tank top cling to me, but in truth, it was fear.


Picking up the unfinished sword with gloved hands, I turned and plunged the blade into the glowing coals before facing my uninvited guest. He’d given himself the tour of my cramped workshop, seeming to admire the various swords on display, some unfinished, some as close to art as I was ever going to get. Shame I couldn’t wield them as well as I could craft them.


“Well?” I managed to instil some genuine irritation in my words in the hope it would disguise the anxiety building inside me. I tried to flick my hair out of my face but a few strands stubbornly clung to my sweaty cheek.


“Impressive.” He nodded once and turned arctic-blue eyes on me before flashing what he probably thought was a knee-weakening smile.


If my guest expected me to gush and swoon, he was in for a shock. “Who are you, and what the hell do you want?” It was late. I was tired. He wasn’t human. I figured I was within my rights to be blunt.


His expression tightened. “You’re Muse, right?” He tossed a gesture at the stuffy workshop. “I was expecting something…else.”


I hadn’t heard that nickname in years. Muse was a tag left over from dark days I didn’t wish to revisit.


Approaching me, he reached inside his coat. I caught a flicker of light slide over a handgun tucked into his waistband and tensed. An unusual motif, like entwined scorpions, adorned the grip. But he didn’t reach for the gun. He withdrew a sword and rested it on my anvil. “I want you to read this.”


I tugged off my glove and skipped my fingers over the smooth surface of the blade. The metal burned cold against my insolent touch, as though the sword resented my presence. It was a wonderful piece of workmanship. The ripple - or hamon - below the surface of the carbon-steel blade hinted at Japanese origins, and the tempered edge was sharp enough to slice through flesh with little effort. An intricate hand-forged guard and leather-wrapped hilt betrayed the sword as functional but with a flair for the dramatic, and yet it was clearly a weapon meant for combat, not ceremony.


A thin snap of power danced up my fingers, and with a small hiss, I snatched my hand back. This sword would not easily give up its secrets. “What’s in it for me?”


Now there was a loaded question. I didn’t know what or who he was, and had no idea how much he could afford or what the stakes involved. “It depends on what I’m going to find. If we’re talking murder, then I want danger money. If it’s just a lovers’ tiff you’re interested in, a few hundred should do it. I’m assuming you want recent information. If you need me to go back more than five years, it’ll be another two hundred.”


“Or I could walk out of here now and tell the world where you are. I know there are a few unsavoury characters from your checkered past who’d be very grateful for the heads-up on your whereabouts.” His smooth voice and slight smile belied the threat in his words.


I smiled tightly, my first smile since his arrival. “Now, there, you see? We were having a civilized conversation, and you just had to go and spoil it by threatening me.”


“Why don’t you just read the blade, and I can leave you to get on with your–” he cast a glance about him, “–work?”


And now he’d insulted me. “I’m not telling you anything until you give me more to go on.” Who did he think he was talking to? Some back alley half-human woman who would fall over her own feet to do his bidding? He might know my name, but he obviously didn’t know me.


He blinked, before turning back on the charm, as if I could be bought by a handsome face. “You’re right. I’m sorry. A few hundred, was it?” He dug deep into his coat pocket and pulled out a wad of cash. Without counting it, he tossed it onto the anvil. “That should cover it.”


I tugged my glove back on, pinching the heatproof fabric between each finger. “I think you should leave.”


He narrowed his eyes. “Just read the sword, Muse.”


I didn’t have time to humor assholes, especially those of the demon persuasion. “Get out.”


He pulled his distinctive gun on me, finger resting firmly on the trigger, aim rigid. “You will do this for me.” It wasn’t an order. It was fact–at least as far as he was concerned.


“Go back to hell,” I sneered, before reaching around and snatching the blade from the forge, flinging both the half-finished sword and some hot coals at him. He recoiled, cursing as the embers bounced off his coat. I dashed for the doors. My hand was on the handle, when he slammed into me, knocking the breath from my lungs.


He thrust the gun under my chin, freezing me rigid. “Why do you have to be so difficult?”


I really didn’t want this to escalate. Bad shit happens when she comes out to play. The darkness slumbering at my core began to unfurl, opening like the petals of a flower, but its intent was far from delicate. The trickling touch of power spilled into my muscles. Heat flooded through my body. The warmth of my element embraced me, threading itself through every part of me, the lure of chaos undeniable.


He abruptly released me and took a few steps back, gun up. His narrow glare measured me.


I pressed my back against the workshop door. Power dripped from my fingertips. I couldn’t see it—the human part of me was blind to the energy—but he could. His arctic eyes blazed with a promise of conflict.


He appeared to consider his next move and then, quite unexpectedly, laughed and lowered the gun, tucking it back into the holster inside his coat. “You’re right. This isn’t worth it.” With his hands up, as if in surrender, he turned and retrieved the sword in question before weaving his way back around workbenches toward me.


“What?” His sudden change in mood completely disarmed me.

Surprised by his abrupt surrender, I did as he asked and watched him slide the door open and step out into the night. A sharp winter breeze invaded the heat of my workshop, rousing me from my muddled stupor. Confused and somewhat disappointed, I followed him out into the alley. The raw energy he’d aroused began to fizzle out. Its departure left me with a sickly chill and bitter sense of loss.
He climbed into the driver’s side of an old Dodge Charger with rust-bruised red paint. I had no idea who he was, where he’d come from, how he’d found me, or what lay hidden in that damn sword. And he was leaving. That couldn’t be right. Didn’t I deserve some sort of explanation?
“Hey!” I ventured further into the street.
Headlights bathed me in twin beams, forcing me to shield my eyes. He gunned the engine, jammed the box into reverse, and swung the car backward into a J-turn before speeding off, fat tires squealing on wet asphalt.
I stood in the street, hand on hip, head tilted to one side and breathed the crisp night air, clearing my lungs of forge-dust. Then the shockwave hit me. The explosion lashed across my back. I must have briefly lost consciousness, but the furious pain in my back quickly summoned me from the depths. A whine drilled into my skull. Alarms sounded from the industrial units around me.
I turned my head toward the heat, grit digging into my cheek as I peered into the smoke bellowing from the hollow gap between two buildings.
My workshop had gone and with it, my attempt at a normal life. 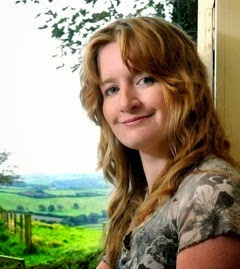 
Born in Tonbridge, Kent in 1979, Pippa's family moved to the South West of England where she grew up amongst the dramatic moorland and sweeping coastlands of Devon & Cornwall. With a family history brimming with intrigue, complete with Gypsy angst on one side and Jewish survivors on another, she has the ability to draw from a patchwork of ancestry and use it as the inspiration for her writing. Happily married and the Mother of two little girls, she resides on the Devon & Cornwall border.