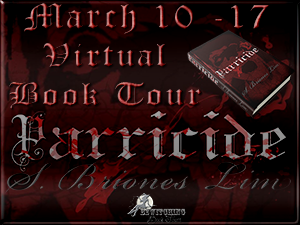 
Stanley Heckley’s world was torn apart the night his wife and infant daughter were murdered by his wife’s ex-lover, James Gandy. Left with no family to call his own, Stanley is consumed with rage and thirsts to exact revenge in the only way he thinks is fair – to kill Gandy’s entire bloodline.


Unfortunately for Stanley, his timid personality and good conscience makes killing a difficult task to accomplish.


Tormented by his inability to avenge his family, Stanley seeks the help of a distant acquaintance known simply as the vampire, Geoff. Touched by Stanley’s plight, Geoff takes it upon himself to give Stanley a thirst for blood and the talent to kill. As a newly turned vampire, Stanley joins Geoff on a complex mission of murder and vengeance as they hunt each member of the Gandy family one by one, wiping the entire bloodline from existence.


Or so they thought.


Over a century later, Stanley learns that a dire mistake has left one Gandy alive. Once again faced with the monsters of his past, Stanley finds himself returning to his hometown of Meyers to hunt the remaining descendant, Amanda. From the get-go, Stanley’s mission is plagued with many obstacles including a new henchman for Geoff, a ghost of a young, sadistic girl, and the fact that Amanda looks remarkably like his late wife. For this member of the undead, hunting the final Gandy may just be the death of him.


Add it to your Goodreads shelf


“No! Please don’t shoot!” Her voice wavered slightly though she tried her hardest to remain firm and unfazed. Had it not been for the tremor in her tone and the unmistakable trembling of her shoulders, the intruder might have bought her act of valor.


The terrified cries of my wife echoed against the bare wooden walls causing me to run in a panic. I flew down a flight of stairs towards the parlor area and noticed the dim flicker of a single candle illuminating the room. It added an eerie ambiance to what was to be the most horrifying moment of my life.


“Gandy! What do you think you’re doing?! Get your hands off my wife!” I shouted with pure ferocity. I wouldn’t be surprised if the blood vessels in my eyes had burst open given the tint of red that shadowed my vision.


“Well, well, lookit ‘ere who it is,” Gandy slurred drunkenly as he gripped my wife’s strawberry blond hair between his fingers. “It’s Stanley Heckley! Or might I say, the Great Stanley Heckley.” He cackled and peered down at my wife.


My eyes fell instantly onto Christiana’s tear stained face. I made an attempt to rush forward, however, she shook her head slightly and mouthed, “Go! Save Katie.”


My stomach wrenched as I pictured our three-month-old daughter hidden under the floorboards in the main room upstairs. She was safe - for now.


I cleared my throat and stood up straighter. Holding my hands out as a final plea, I said as calmly, but with as much authority as I could muster, “Gandy, please put down the gun. You had a little too much to drink tonight and I promise that if you walk out of here this instant, I will not tell the authorities of this little incident.”


I braced myself for his reaction and was surprised to hear a hearty chuckle in response. Christiana winced as he continued his belly laugh and pulled tightly against her head. Her beautiful braid was now a rat’s nest and I was surprised not to find clumps of her pinkish locks strewn along the floor.


“Do you think you have the right to tell me what to do?” Gandy laughed hysterically. With his gun toting hand he reached up and wiped tears from the corners of his eyes.


“I beg your pardon but I don’t see the humor in this situation,” I growled.


“You want to know what’s funny?” Gandy snapped. “The fact that Christiana here picked you over me. What does she see in you anyway? Nothing but a stack of cash that your daddy gave you.”


I glanced around the room frantically, looking for any escape route. My eyes focused on the window and my mind methodically went over any possible option I had to get my family out of this situation. It was as if everything was running in slow motion, from the flow of my blood through my veins to the harsh beating of my pained heart.


“Are you listening to me?!” Gandy’s hazy voice interrupted my frantic thoughts.


His eyes widened as he pointed the barrel toward me. Christiana gasped and began pleading frantically, begging for him to drop the gun. Ignoring her cries, he lifted an eyebrow as he looked me dead in the eye. “It’s yes, sir,” he corrected.


I nodded my head. “Yes, sir,” I replied through gritted teeth.


His lips curled up into a sinister grin and he began pacing the room dragging Christiana along with him. She grabbed at his hand, trying to pry his fingers from her scalp, but was unsuccessful. The gray skirt of her dress, a birthday present from me, dragged behind her, becoming soiled with the dust from the floor.


“Now, I don’t know why you’re stupid enough to come back to town,” he said through gritted teeth. “The folks here were finally steer clear of the Heckleys, yet here you are infesting our town again with your filthy riches. You think your family’s better than all of us here, don’t you? Just because of your blue blood ways.”


“Gandy,” I said in an even tone. It pained me to even speak, my throat dry and parched from fear. “Please leave my property. We’ll deal with this when you’re sober in the morning.”


“This ain’t about being sober! This is about the abomination that your family has bestowed upon the less privileged. That’s why you came back to town now, isn’t it? To take over all the businesses that your greedy father wasn’t able to get his cold, vile hands on! You should have stayed in God knows where you were!”


“It was a mistake to come back,” I agreed as I nodded my head; and good God did I agree. “We only came back to tie up ends concerning my father’s estate. Nothing more.”


My blood began boiling and instinctively my fists clenched together. “Yes,” I said in a raspy tone. The pain of having lost my father still burned freshly in my heart. Hearing Gandy speak so nonchalantly about his passing made me want to gouge his eyes out. That would have to wait. For now I needed to focus on helping my sweet wife.


Thanks to her Mom's unwavering devotion to read a bedtime story to her every single night throughout her childhood years, S. BRIONES LIM's love for books began before she could even speak.


Author of the Life Force Trilogy, S. Briones Lim's other obsessions include time with family, POPCORN, watching movies and her pug, Tobi. She currently lives on the East Coast with her husband and continues to write every day.