What Happens in Scotland & Summer Is For Lovers


She woke up married… And then she ran.


When recent widow Georgette Thorold wakes up in a Scottish inn with a wedding ring on her finger and lacking all memory of how she came to be there, she does what any well-bred lady with a modicum of sense and a distrust of marriage would do: she panics, clocks the wickedly handsome stranger in her bed over the head with a chamber pot, and runs.


James McKenzie, Esquire has either spent the evening protecting a very naïve, and—dare he say it—very drunk young lady from the advances of every disreputable character in the town of Moraig, or he has gone and married a pretty, scheming thief. Not that his own head is entirely clear on the matter, but when the woman in question repays his kindness with a knock on the head, the bill for her room, and the theft of his purse, an embarrassed James is determined to track her down and show her she picked the wrong solicitor to swindle.


As Georgette sets out to discover exactly what happened during her forgotten night, she uncovers a man that seems far more a hero than a rake. But when they finally meet, instead of sweeping her into his arms and kissing her senseless, he serves her with a summons, claiming she is a thief. Now the fight is on, and the only question is was it a night worth remembering? Or a mistake they would both rather forget? 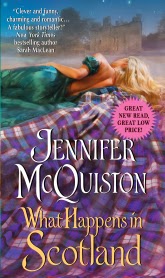 Buy Links (What Happens in Scotland) 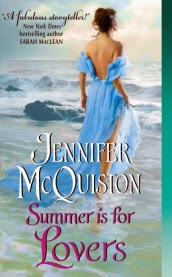 David Cameron has been tricked. After bringing his supposedly ailing mother to Brighton to take the waters, he’s found himself bombarded with young ladies of marriageable age, while his mother has made a marked improvement. Seeking respite from the hordes, he retreats to a beach he hasn’t seen in years--and finds a woman he’s never quite been able to forget.

Caroline Tolbertson just wants to be left alone. But her mother is determined to see her married off, no matter Caroline’s protests--or her embarassing lack of suitors. Seeing David Cameron, her childhood crush, again sets her heart racing, but she’s older and wiser now. And no, that wasn’t her heart sinking when David suggested a faux courtship instead of the real thing.

But Caroline has never been very good at following the rules, and the fake attraction soon grows into the real thing. Now Caroline has more scandalous pursuits in mind and David is finding it very hard to say no to his gorgeous friend. Will giving in to temptation send them both down a path they each claim to abhor--straight to the altar?

Buy Links (Summer is for Lovers)


A veterinarian and infectious disease researcher by training, Jennifer McQuiston has always preferred reading romance to scientific textbooks. She resides in Atlanta, Georgia with her husband, their two girls, and an odd assortment of pets, including the pony she promised her children if mommy ever got a book deal. Jennifer can be reached via her website at www.jenmcquiston.com or followed on Twitter @jenmcqwrites.

(Paperback Copy of WHAT HAPPENS IN SCOTLAND & SUMMER IS FOR LOVERS, and Pack of Mother Mae’s Chocolate Chip Scottish Shortbread Mix)

a Rafflecopter giveaway
Posted by 3 Partners in Shopping at 1:25 AM