Touched With Fire by Christopher Datta Cover Reveal and Giveaway 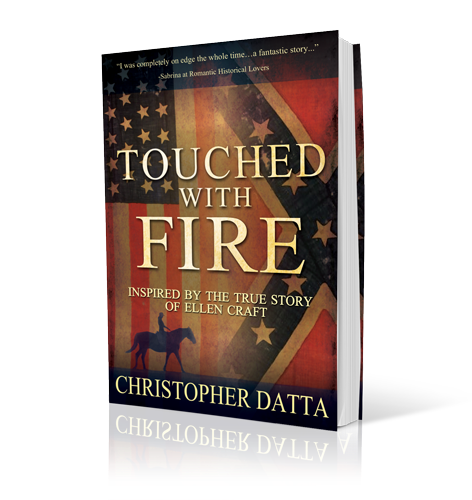 Welcome to the TOUCHED WITH FIRE cover reveal! This fabulous historical fiction has received a new look and it's going to blow you away. Now before we get to that, let's talk about Touched With Fire, a novel of the Civil War inspired by the true story of Ellen Craft.

Ellen Craft is property; in this case, of her half-sister Debra, to whom she was given as a wedding gift. The illegitimate daughter of a Georgia plantation owner and a house slave, she learned to hate her own image, which so closely resembled that of her “father:” the same wiry build, the same blue eyes, and the same pale—indeed, lily-white—skin. Ellen lives a solitary life until she falls, unexpectedly, in love with a dark-skinned slave named William Craft, and together they devise a plan to run North. Ellie will pose as a gentleman planter bound for Philadelphia accompanied by his “boy” Will. They make it as far as Baltimore when Will is turned back, and Ellie has no choice but continue. With no way of knowing if he is dead or alive, she resolves to make a second journey—South again. And so Elijah Craft enlists with the 125th Ohio Volunteers of the Union Army: she will literally fight her way back to her husband. Eli/Ellie’s journey is the story of an extraordinary individual and an abiding love, but also of the corrosive effects of slavery, and of a nation at a watershed moment.

“The story tells of how a brave and resilient black woman went to great lengths to gain not only her freedom, but that of the man she loved.” - Amazon Reviewer Kelley McCormick “[A] deliberate and sincere historical fiction wends its way through this abject time in our nation’s youth...Touched with Fire is a welcome addition to the ever-increasing canon of Civil War fiction.” - E. Warren Perry, Jr., author, Swift to My Wounded: Walt Whitman and the Civil War

Celebrate this great new cover with us by entering our giveaway below and spreading the word!