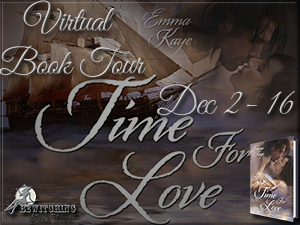 
Alexandra Turner will do anything to save her twin sister. Even when she’s transported back in time to Regency England. Rescuing her sister and finding her way back to her own time will take all her concentration. Falling in love is not an option.


With the death of his brother, Nicholas Somerville became the ninth Marquess of Oakleigh and must return to England to take his place in society. Part of his responsibility will be to find a wife. It never occurs to him he might actually discover a woman he could love--until he meets Alex on his voyage home.


Can Alex and Nicholas find a way to bridge the gap of time and circumstance? Can they overcome their fears to realize that true love transcends time? Or will a dark secret from Alex's past rear up to separate them forever?


Her gaze drifted to his mouth as he spoke, fascinated by the way the scar pulled slightly at the corner. She felt a strong urge to kiss that corner, to run her tongue along the seam and dip between his lips, along his teeth.


He turned away, and she blinked herself back to reality. She couldn’t believe the thoughts that kept popping into her head when she looked at him.


And she was going to be stuck on a ship with him for almost a month.


He set off, and she rushed after him, thankful he couldn’t see the blush heating her cheeks. It was going to be a long month.


She caught up, practically jogging to keep pace with his long strides.


He looked her briefly up and down in an assessing manner that strained Alex’s nerves. “You don’t look like much of a sailor, and you’re too young to have any skill as a carpenter.”


She was surprised he hadn’t already uncovered her disguise. Her instincts warned her he wouldn’t be easy to fool, and she would be smart to keep her distance, even if distance was the last thing she wanted right now. Of course, it wouldn’t be a problem if he decided she wasn’t qualified to work on his ship.


“You’re wondering what possessed him to hire me. Perhaps he took pity on me, or maybe I’m better qualified than I look,” she replied haughtily, and immediately wished she could take the last part back. Now he might think she had some sailing skill.


He snorted, and she got the feeling amusement had replaced his annoyance, though his expression hadn’t changed.


“My guess would be pity. He sometimes has more heart than sense.” He sighed. “Despite some of his more—emotional—decisions, he’s a good first mate and has served me well. We’ll have to see how you fare.” He gave her a slightly puzzled look. “There’s something about you though. I can’t quite put my finger on it.”


Alex breathed a sigh of relief when they arrived at the tavern where she’d met the Adonis the night before. This time of the morning everything was quiet, and they had to wait a few moments before anyone came to see what they wanted.


A sour-faced woman entered the room, muttering about the hour and cursing under her breath. But after a quick glance at Nicholas’s face, she quieted and listened to his request. She told them which room the first mate was in then quickly disappeared through the door by which she had entered.


“Follow me.” Nicholas climbed the stairs and knocked loudly on the appropriate door. He didn’t wait for an answer before pushing it open.


The Adonis slept soundly in the middle of the large bed that dominated the room. A blanket draped around his hips didn’t disguise the fact he was naked.


Alex had a difficult time deciding where to look. On his left, the pretty waitress from the night before was hastily pulling the covers up to her chin, while another woman on his right merely reached over to try to waken her bed partner, as though the appearance of two people at the door was hardly cause to cover up.


“I can see why he didn’t show,” Alex muttered under her breath. She hadn’t meant to be heard, but apparently Nicholas had good hearing and laughed.


“Quite understandable,” he said, still chuckling.


Meanwhile, the first mate opened his eyes and looked up at the captain. “Bloody hell. Am I late?”


Emma Kaye is married to her high school sweetheart and has two beautiful kids that she spends an insane amount of time driving around central New Jersey. Before ballet classes and soccer entered her life, she decided to try writing one of those romances she loved to read and discovered a new passion. She has been writing ever since. Add in a playful puppy and an extremely patient cat and she's living her own happily ever after while making her characters work hard to reach theirs

December 2 Spotlight
Musings of Mistress of the Dark Path
http://mistressofthedarkpath.wordpress.com/

December 16 Spotlight
Mila Ramos
www.jademystique.blogspot.com
Posted by 3 Partners in Shopping at 1:18 AM