Peter can tell you how to run a great marketing campaign. He can tell you everything there is to know about successful trade show programs. He can tell you stories about the thousands of people he has met, miles he has flown, hotel rooms he has stayed in, and ways to work the system to your advantage. Still, he can’t tell the woman he loves how he feels. Peter in Flight is a novella by Paul Michael Peters designed to be the perfect read for a cross-country flight or extended layover. Life moves fast in this quick read about a “trade show guy” and a love he thinks he can never have. 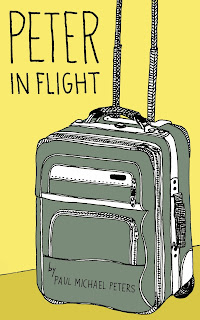 
Excerpt – I’m in Vegas staying at the Hilton next to the convention center. There’s a place in the hotel called Star Trek: The Experience, based on the television series and movies. There are games and a Star Trek-themed bar along with artifacts from the show and a “virtual experience.” Two years ago during COMDEX, the largest conference I attend, I made friends with a bartender at the Star Trek Experience. Dressed as an alien character called a Ferengi, with a large prosthetic forehead and enormous ears, he stands behind the bar on a riser. Once he is off the riser to grab a drink or walk the floor you realize he is five feet tall at best. I only know him as Phil the Ferengi, but he may be the best bartender I have ever met. He also owns a string of car washes. “Hu-mon,” he greets me in character, “what can I get you? Drink? Holodeck? Games?” “Hello Phil, good to see you again.” “Ah, yes hu-mon, I thought I recognized you. What are you drinking tonight?” “I’ll have a gin and tonic please.” He steps up on his platform with the drink when he returns. I know I can talk to him because it’s a slow night and I know his name. “How are your travels, hu-mon?” “They’re good, thank you. How is your car wash?” “They are very profitable. All of this desert dust can eat away at a car’s finish. But there’s also a new city ordinance; I have to “go green.” “What will that mean for you?” “I have to add these tanks that collect used water, then filter it, and use it again. They call it gray water.” “I can imagine why.” “Are you sad, hu-mon? Or tired? You don’t look well.” “I’m losing sleep. I’ve never had this problem before. I can usually sleep anywhere, but in the last week I can’t get a full night.” “What’s her name?” “It’s that obvious?” “It is usually women or money. What’s her name?” “Tatiana. She is both unavailable and my obsession.” Phil grabs the bottle of gin and puts in on the bar in front of me. “Do you know Plato?” “The philosopher? A little.” “Through Aristophanes, who was a peer of Plato’s, we know this one interesting story about early hu-mons. Hu-mons were not separate from one another, but were made in pairs. They had two heads, four arms, and four legs. And they wouldn’t walk around so much as they would roll around tucked up in a ball.” “This is not Star Trek?” “No, ancient Greek philosophers describing the earliest version of humankind.” “Go on.” “So here they were—women and women, men and men, men and women—all sorts of these paired creatures rolling at great speed across the countryside of ancient Greece. The speed at which they move, the power they have, starts building confidence in humanity. The confidence turns to pride. And it’s with this pride, what the Greeks call hubris, that they decide they are better than the gods and try to overthrow them.” A couple comes to the bar interrupting Phil and he takes their order. Once they are settled, he returns. “So the hu-mons think they can conquer the gods. But when the hu-mons attack the gods, Zeus strikes them with such great power that he splits them all in two. Now the hu-mons are sad, desperate, and alone, and they start to kill themselves because they’re having a hard time without the warmth and comfort of one another. Some remove themselves from the community. Others get lost in the wilderness and are never seen again.” “So what happens?” “Zeus is wise. He and the other gods need the hu-mons to worship them. While they are asleep, he changes their bodies to what we know today, so that we walk upright and find it easy to reproduce.” “Interesting.” “Well, here’s the part that applies to you, sleepy hu-mon. After all of those changes, the gods left a memory, a longing inside each of them for their other half. That craving for the other half is instilled so deep inside, that we end up traveling the world searching to fill that absence. And when we are fortunate enough to find that other half, we know instantly—getting lost in the entwinement of friendship and love and intimacy—that we have finally found home. People like this will spend their whole lives together. If you ask them what they find attractive or appealing about one another, they can’t explain it—they just know it’s right.” “It’s a beautiful idea, that something is missing from each of us, and we have to trust others to fill that. I guess the heart wants what the heart wants; there’s no getting around it.” “Easier to say, but I like my story better.” “Thanks for your time and the drinks,” I say, getting up. “Any time, hu-mon. We’re always open.” 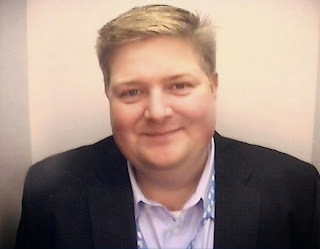 Author Info –  Paul Michael Peters is an American fiction writer based out of Ann Arbor Michigan. After studying at the Second City in Chicago he spent extended periods of time living in Philadelphia and Toronto before returning home to his beloved big mitten shaped state. "Peter in Flight" is his debut work. Author Quote "I wrote this story while I traveled extensively for work between 1998 and 2008 taking notes on the things that happened on each trip. I could not include all the good stories. Looking back on my time on the road, I always liked to think of myself as George Clooney from Up in the Air, but in reality, I was John Candy from Planes, Trains, and Automobiles."

Giveaway – One autographed copy of Peter in Flight for each tour stop Rafflecopter code - a Rafflecopter giveaway
Posted by 3 Partners in Shopping at 12:26 AM