The Advent of Murder by Martha Ockley Book Review 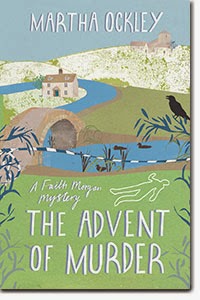 The Advent of Murder


About the book:
Faith Morgan, former policewoman and vicar of the small English village of Little Worthy, goes to visit one of her parishioners at his farm, only to discover the house surrounded by police cars. A body has been found in the local river and farmer Markham is charged with murder.
Though busy with preparations for Christmas, Faith is called on to investigate when it's found out that the victim is also a member of her congregation--Lucas Kemp, a member of the choir.

Faith's informal inquiries lead her to uncover a hotbed of tensions and romantic rivalries in the choir, questions about drugs, and a run-in with an unsavory uncle--which leads to a dramatic rescue by Ben, Faith's former detective partner and ex-boyfriend.
In the tradition of Father Brown and Miss Marple, The Advent of Murder brings readers an authentic picture of English rural and church life combined with a satisfying mystery that will keep readers guessing until the end.

As I was reading The Advent of Murder another in the Faith Morgan Mysteries I was reminded of a TV show that used to have a really nice neighborhood sleuth that solves mysteries in her spare time. The only difference is that Faith actually is a former policewoman and this lady was not. I loved the Setting of the story and the characters that all lived there. Faith, who now is a vicar in her church only wants to prepare for the Christmas season. When she and others realize that the victim was a member of their church it is only natural that she would try to figure out who killed one of their own. Before anyone discovers what is happening to the townspeople, Faith finds herself in a precarious position. Enter her ex-boyfriend who was her detective partner when she was a policewoman. I really liked this story, it is a nice book to cuddle up to when it is cold outside. I give this book a 4/5. I was given this book by Kregel for the purpose of a book review and all opinions are my own.
Posted by 3 Partners in Shopping at 1:12 AM