After the Ending by Lindsey Pogue and Lindsey Fairleigh Book Blitz 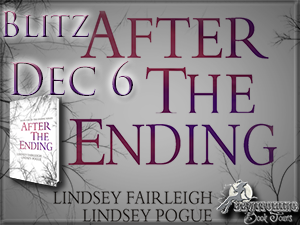 
The Virus spread. Billions died. The Ending began. We may have survived the apocalypse, but the Virus changed us.


When people started getting sick, “they” thought it was just the flu. My roommate, my boyfriend, my family…they’re all gone now. I got sick too. I should have died with them—with the rest of the world—but I didn’t. I thought witnessing the human population almost disappear off the face of the earth was the craziest thing I’d ever experience. I was so wrong. My name is Dani O’Connor, I’m twenty-six-years-old, and I survived The Ending.


The Virus changed everything. The world I knew is gone, and life is backwards. We’ve all had to start over. I’ve been stripped of my home, my dreams…all that is me. I’m someone else now—broken and changed. Other survivors’ memories and emotions haunt me. They invade my mind until I can no longer separate them from my own. I won’t let them consume me. I can’t. My name is Zoe Cartwright, I’m twenty-six-years-old, and I survived The Ending.


We’ve been inseparable for most of our lives, and now our friendship is all we have left. The aftermath of the Virus has stranded us on opposite sides of the United States. Trusting strangers, making sacrifices, killing—we’ll do anything to reach one another. Fear and pain may be unavoidable, but we’re strong…we’re survivors. But to continue surviving in this unfamil-iar world plagued by Crazies and strange new abilities, we have to adapt. We have to evolve.


And more than anything, we have to find each other.


EXCERPT ONE (ZOE)
Looking around apprehensively, I made my way toward the convenience store in hopes of finding a bathroom. The vacant world around me was eerily silent. All I could hear was the creaking of a giant wooden billboard being assaulted by the wind.
How long has it been since anyone was here? Through the dark windows I saw a bathroom sign that looked promising, but I couldn’t bring myself to enter. I wonder if it’s safe…
As I stood outside of the store, I noticed a newspaper box still filled with papers. I leaned closer. The headline read, BILLIONS DEAD, and the paper was dated December 9, right before everything had started to shut down. I inserted a quarter and snatched out a paper. Scanning its contents, my mouth grew dry and my body stiffened.
…the H1N1/12 pandemic…
…looting and riotous outbreaks everywhere…
…end of civilization as we know it…
…survivors losing their minds…
…governments can’t control…
…the Apocalypse…
The newspaper slipped from between my fingers. Frozen in place, I was suffocated by the reality of our situation.
This isn’t going away.
The world ended.
Thinking of the strange feelings I’d been experiencing, I once again questioned my own sanity. My thoughts were too loud to silence. My heart thudded, and I couldn’t swallow the lump in my throat. Looking out into the abandoned world around me, I realized how alone we really were.
I bent down to reclaim the paper and turned on my heels to head back toward the truck, completely awestruck as the words I’d read replayed in my mind. Each was a reminder that the only world I’d ever known had ended.
EXCERPT TWO (DANI)

Eventually, sporting fresh pajamas and damp hair, I was again settled in the living room but on an unfamiliar couch.
“This isn’t my couch,” I said to no one in particular. I watched Jack as he stared forlornly at the clean kitchen floor. Someone had swept up the mountain of kibble and locked it away.
“Yes, well, yours was…unsuitable. We swapped it with one from an apartment down the hall. It’s not like they’ll be needing it anymore,” Chris explained, setting a glass of orange juice and a generous plate of breakfasty goodness on the coffee table in front of me.
I stared at the food but didn’t touch it, even though my stomach grumbled in need. Cam usually made me breakfast. “What d’you mean? Why won’t they need it?”
Chris halted her efforts to arrange a fuzzy blanket around my legs and looked at me with sharp, sky-blue eyes. Her expression melted into sympathy before she spoke. “Because they’re dead, hon. Most people are. I thought you knew.”
“I…,” I tried to speak, but my throat caught after the first sound. I shook my head.
Satisfied that I was covered and warm, Chris moved to the other side of the coffee table to sit in a large recliner—another item from the furniture shopping spree in my neighbor’s apartment.
“It was that damn Virus…we all had it…weeks ago,” Chris said, gesturing around the room even though it was empty of anyone but us. “Several days back, everyone in the world seemed to be infected. Now everyone’s pretty much dead. The rest are like you and me—Survivors. But as far as we can tell, we’re in the extreme minority.”
“I don’t understand,” I said, confusion creasing my brow. “This is impossible.”
“Not impossible. Just improbable…and really, really awful.”


Lindsey Fairleigh lives her life with one foot in a book—as long as that book transports her to a magical world or bends the rules of science. Her novels, from post-apocalyptic to time travel and historical fantasy, always offer up a hearty dose of unreality, along with plenty of adventure and romance. When she’s not working on her next novel, Lindsey spends her time reading and trying out new recipes in the kitchen. She lives in the Napa Valley with her loving husband and confused cats. You can visit Lindsey’s blog at www.lindseyfairleigh.blogspot.com


Lindsey Pogue has always been a little creative. As a child she established a bug hospital on her elementary school soccer field, compiled books of collages as a teenager, and as an adult, expresses herself through writing. Her novels are inspired by her observations of the world around her—whether she’s traveling, people watching, or hiking. When not plotting her next storyline or dreaming up new, brooding characters, Lindsey’s wrapped in blankets watching her favorite action flicks or going on road trips with her own leading man. You can visit Lindsey’s website at www.lindseypogue.com

Taking It One Book at a Time
http://takingitonebookataitme.blogspot.com

So Much to Write
http://somuchtowritesolittletime.com

Curling Up with a Good Book
www.curling-up-with-a-good-book.blogspot.com