NO TURING BACK
Kathleen Turner, #1

Being a bartender by night and law firm runner by day helps make ends meet for Kathleen Turner. Mostly. Being 23 and single in Indianapolis wasn’t exactly a thrilling adventure, but then again, that’s not what Kathleen wanted. At least, not until she met Blane Kirk.

Navy SEAL turned high-profile attorney, Blane is everything a woman could want. The only problem? He’s her boss. Blane is known for playing the field and the last thing Kathleen needs or wants is to get involved with him. But when her friend is murdered and it seems Kathleen will be next, she may not have a choice.

Now Blane is the only thing standing between her and people who want her dead, including assassin-for-hire Kade Dennon. Beautiful but deadly, he’ll kill anyone who gets in his way, even the woman who makes him question everything he’s become.

The deeper she sinks into the web of lies and murder, the more Kathleen realizes she can trust no one if she’s going to survive. No one is innocent. Not even Blane. 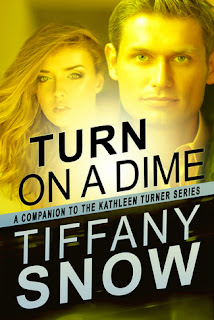 Blane Kirk is a Navy SEAL turned high-powered attorney with old money and an even older pedigree. Yes, he plays the field, changing women as often as he changes his ties, but they’re not complaining. He has only two rules – 1) Don’t date employees and 2) Don’t get emotionally involved. Those rules have served him well. He sees no reason to change his ways, until his Runner, an employee in his law firm named Kathleen Turner, does an unexpected face plant in his lap.

Kathleen’s too young, too innocent, and suddenly much too vulnerable when her friend is murdered and Blane knows she could be next. Keeping her alive means keeping her close, but can Blane keep her safe...from him? Kathleen’s like no woman he’s ever met, and protecting her could be the one thing he never expected that would make his life turn on a dime.

TURN ON A DIME – BLANE’S TURN is a companion novel to NO TURNING BACK, Book One in The Kathleen Turner Series. 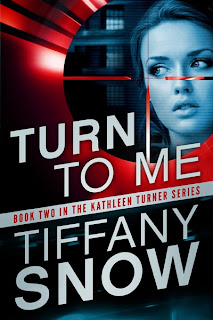 TURN TO ME
Kathleen Turner, #2

What Kathleen Turner doesn’t know just may kill her.

Her boyfriend, Navy SEAL turned high-powered attorney Blane Kirk, is keeping secrets from her – the deadly kind – and it may end their relationship before it’s even begun.

Someone in the shadows is stalking and terrorizing Kathleen, and Blane must lose a trial with far-reaching ramifications if he wants to keep her alive. Blane turns to assassin-for-hire Kade Dennon to keep Kathleen safe, a strategy that may backfire in more ways than one. Though Kade swears he hates her, he’s helpless to guard against things he’s never felt before and when they’re together, Kathleen sees something forbidden in his eyes.

Kathleen must find the truth behind the lies before her time, and luck, runs out, or she may pay the ultimate price for falling in love with Blane Kirk. 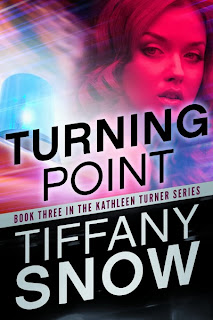 After her promotion from law firm Runner to Investigator, Kathleen Turner is learning the ropes of her new job from none other than assassin-for-hire Kade Dennon, a situation her boyfriend Blane Kirk is none too happy about. But the lessons with Kathleen take a back seat when Kade becomes a target. Previously untouchable, his enemies now know of the chink in his armor – his brother’s girlfriend.

And Kade’s not the only thing coming between Kathleen and Blane. From Blane's inexplicable defense of a man guilty of a horrible crime, to a mysterious stranger from Kathleen's past, to Kathleen's risky investigation into human traffickers, the obstacles mount against a relationship that's just begun to find trust again.

While Blane considers a job offer that would take him back to the front lines in the war on terror, Kathleen is determined to pursue her new career, with or without his approval. Unfortunately, her current case is far more dangerous than anyone knows. Someone close to Blane will go to extreme lengths to split them up, lengths that may prove worse than death for Kathleen.

Kathleen, Blane and Kade must atone for the sins of the past and the present. The fallout will force Kathleen to a turning point...in her career, and her life. 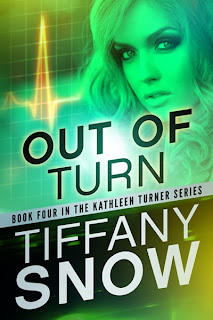 OUT OF TURN
Kathleen Turner, #4

Breaking up is hard to do, as Kathleen Turner discovers. After a falling-out with her ex, high-powered attorney Blane Kirk, she’s moving on the best she can. Unfortunately, someone from her past is set on revenge and nothing short of killing Kathleen will stop them.

Keeping his brother’s ex-girlfriend alive isn’t something new to assassin-for-hire Kade Dennon, but this time can he protect her from himself? She’s a woman he can’t convince himself to walk away from, no matter what it costs him.

Regret is a constant companion for Blane as he realizes the truth behind the lies he’s been told. Can love heal the past, or can some mistakes not be undone?

Murder reunites Blane, Kade, and Kathleen as the police put Blane in their crosshairs. Blane may lose everything unless he and Kade can find the real murderer before it’s too late. But if they can’t set aside their love for the same woman and work together, it will tear them apart.

In Out of Turn, Kathleen is caught between two warring brothers, and the consequences may be fatal. 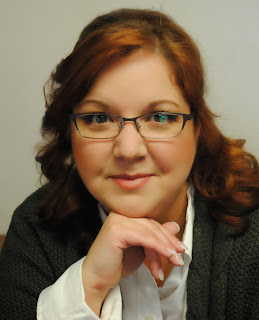 
My debut novel, NO TURNING BACK, is the first book in The Kathleen Turner Series. I write about things I love to read myself - a heroine who could be a neighbor or best friend; two men who each portray their own version of darkness and light, each vying for her affection; and a story that focuses as much on the characters as it does the suspense. NO TURNING BACK, TURN TO ME, TURNING POINT and OUT OF TURN currently comprise The Kathleen Turner Series. The fifth and final book, POINT OF NO RETURN, will be released in May, 2014. A companion novel, TURN ON A DIME – BLANE’S TURN, is also available.


As for me, I've been reading romance novels since I was way too young to read such things, have an unhealthy obsession for all things Doctor Who, prefer Pepsi to Coke and Absolut to both, think men who drink girly cocktails are wusses, have learned to never stop believing in my beloved St. Louis Cardinals, and can recite the entire scripts of When Harry Met Sally and Apollo 13. George Washington is cool, Bon Jovi still rocks the house, and Bruce Willis is the ultimate alpha-male hero. Most of all, romance never, ever gets old.


Visit my website http://www.Tiffany-Snow.com for more information and special extras.


12/16 Reading Between the Wines (Spotlight)


1/11 Ramblings From This Chick (spotlight)