Bond Mason’s roots run deep in the backwoods hamlet of Trespass, Florida. Nestled against the banks of the Suwannee River, the only home she’s ever known holds bittersweet memories of a family long gone. Except one of her ghosts isn’t dead and possessive ex-lover James Kyle wants her back.

U.S. Deputy Marshal Nathan Gates sights are set on capturing fugitive Robert Kyle. Wanted for the cold-blooded murder of a DEA agent, Robert is suspected of being hidden away with his moonshine-brewing, marijuana-growing family of fellow lawbreakers, one of which is his brother, James.

Nathan expected high temperatures when he arrived in Trespass. What he hadn’t counted on is his searing attraction to southern beauty Bond Mason. She winds him around her finger like a tendril of Spanish moss, but his lawman’s intuition tells him she’s hiding secrets too. When he finally convinces her to talk, he’s not prepared for the dark truths she reveals about her hometown.

The Suwannee is deep, but Trespass’s sins run much deeper. For once, Nathan might be in over his head. 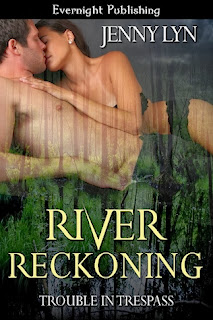 “That’s far enough,” Bond said, never taking her eyes off the man closest to her. In her peripheral vision the other man stopped, raising his hands at his sides while his mouth opened and closed like a fish out of water.

“Whoa, let’s not get crazy here. Neither one of us is armed, miss,” the man directly in front of her said … the tall, dark, and disturbingly handsome one.

“Okay, bad choice of words. Could you please put down the cannon? We’re not going to hurt you.”

His brown-eyed gaze traveled lazily over her face and body, making her skin grow hotter than what could be attributed to the day’s scorching temperatures. He may not be armed, but he was most certainly dangerous. Despite the strange predicament, her nipples tightened rebelliously beneath the thin layers of her clothing.

Oh, Bond, now is definitely not the time.

“Obviously not, since I’m the one holding the big gun. It’s not very polite or wise to go sneaking up on someone in the woods. Did you two take a wrong turn somewhere?” Bond looked pointedly at the other man’s choice in snazzy footwear. “Get lost on your way back to the big city?”

The shorter one, though not by much, muttered something she couldn’t make out, shaking his head at the ground. Or maybe he was just sad his pretty boots were getting dirty.

“Look, we were told back at the bar we could find Bond Mason on this trail.”

“Well, congratulations, Boy Scout. You found her. Now who are you?”

She should be used to that question by now, but it still managed to grate on her nerves. And oh hell, he had a dimple in his right cheek when he smiled. Talk about unfair. It was hard to look impervious while staring at dimples on a face as pretty as his.

“I thought we’d established that already. How about answering my question,” she said.

“Can I drop my hands? My identification is in my back pocket.”

Bond shrugged one shoulder. “I never told you to raise your hands.”

Biting his bottom lip to no doubt hide another grin, he reached into the back pocket of his jeans, causing the soft cloth of the black t-shirt he wore to mold to his broad chest. Pulling out a thin leather wallet, he flipped it open and held it out for her. A shiny silver star filled her vision. Her stomach sank to her toes. She quickly scanned the card next to it.

Dammit. Bond lowered the gun and tucked it into the back waistband of her shorts then adjusted the strap on the camera slung across her chest. Irritated, as she would be by a pesky wasp, she brushed past Deputy U.S. Marshal Nathan Gates, heading back toward home.

“Miss Mason, we’d like to talk to you,” Nathan said, stomping along behind her, his partner following along.

“So talk,” Bond said without slowing her steps.

She huffed out a harsh laugh, spreading her arms wide. “It doesn’t get much more private than this, Marshal. Unless you’re afraid a mockingbird might repeat what you say. I figure you’ve got about four minutes before we clear the woods.”

“It’s always about the Kyle brothers. You think you’re the first federal boys to come sniffing around for information on them? Not hardly.” She ducked under a branch. “I’ll tell you the same thing I told the others. I couldn’t give a damn about how much moonshine they brew or how much weed they grow.” Bond waved her hand in the general direction of the opposite side of the river. “That’s their land over there, and as far as I know they pay the taxes on it. What they do there, regardless of whether it’s legal or not, is none of my business.”  Not that she approved of what the Kyles did. She just did her best to distance herself from it, both mentally and physically. It was the only way Bond managed to hold onto her sanity.

“Would it concern you to know Robert Kyle is suspected of killing a federal agent, and his brothers recently helped him escape from a prison work camp up in Mineola? Or that Garrett Kyle may have kidnapped a fifteen year old girl from around here?”

Bond halted abruptly, her chest cavity going as cold as fresh-tapped spring water. She’d heard the talk of Robert being arrested and why, but she hadn’t heard he’d escaped, or the news about the girl. She propped her hands on her hips and sighed. Nathan came around to stand in front of her. “We could use your help.”

“With what?” Bond shook her head in frustration and started walking again. “I don’t know anything about a murder or a kidnapping.”

“But you have to have connections here in Trespass. Aren’t you a native?”

“As a swamp cabbage,” she grumbled.

She could’ve sworn she heard Nathan chuckle before he resumed his pestering. “Your place is a local landmark, a popular hangout. And it’s directly across the river from theirs.”

“That’s like saying I know how to make cheese because I live across the street from a dairy. Proximity means nothing, Marshal. Neither does popularity, for that matter.”

“All this talk about food is making me hungry,” his partner said glibly. Bond resisted a chuckle of her own. It wouldn’t do to make nice with these two because trouble would soon follow, hot on their muddy boot-heels.

Nathan wrapped his fingers around her bicep—completely around her bicep, she noticed—stopping her at the edge of the woods. A boat sped by on the river. Bond tracked it with her eyes cautiously before she glanced down at his hand on her arm then up at him. He released her from his warm grip, but her skin continued to tingle where his fingers had been. “Can we please just have thirty minutes of your time?”

She studied his face for a moment before she turned away from the intensity in his watchful eyes. Her cousin, Sarah, was still lying in the sun, showing way more bare skin than she should. At fifteen, she was just now beginning to blossom into a beautiful young woman. If anything happened to Sarah it would devastate Bond’s Aunt Margie and Uncle Pete. Bond, too.

Blowing a slow breath through her nose, she caved, and rather easily at that. “I live in the white house with the green shutters on the other side of the Fish Camp. Wait for me on the back porch. I need to check in at the bar first.”

The handsome Marshal gave her a relieved smile, making him altogether too attractive for his own good. “Thanks, Miss Mason.”

Her hormones said, “You can call me Bond.”
Nathan nodded once. “We’ll be waiting.”

AUTHOR BIO
I started reading when I was four, thanks to a babysitter who found out the only way to get me to sit still was to put a book in my hand. By the time I entered kindergarten, I’d blown through just about every Little Golden Book ever printed. Ten years later, much to my mother’s dismay, I found her stash of paperback romance novels. She tried to divert me back to something more chaste by buying me Harlequins, but I still snuck copies of her Kathleen Woodiwiss’s and Johanna Lindsey’s when she wasn’t looking. Shanna, The Flame and the Flower, and Fires of Winter will always hold special places in my heart because they introduced me to roguish heroes, headstrong heroines, and the trouble they could get into together.

I live in a swampy little corner of north-central Florida with my family, both the two-legged and four-legged variety. I love to read, run hot and cold in regards to cooking, and I never miss an episode of Justified, Longmire, or Dexter. I guess I like justice in all its various forms.