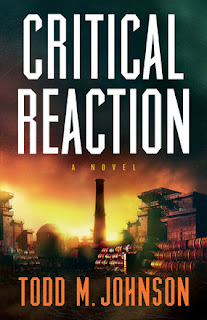 After turning out plutonium for the Cold War, the shuttered Hanford Nuclear Facility's poisoned buildings still pose a risk to the surrounding community. The men who guard the facility are told the dangers are under control, but then the worst happens--a thunderous explosion in the dead of night.

Kieran Mullaney survives the blast, but his attempts to discover what really happened are met with silence and threats. Convinced that Hanford is hiding something, Kieran reconnects with his old friend, lawyer Emily Hart, and enlists her help in finding out the truth. But the deeper the two of them dig, the stranger--and more dangerous--this case gets.

The Hanford Nuclear Facility explodes and  everyone is shocked in the middle of the night.When a man named Keiran Mullaney who made it through the explosion tries to find out what really happened he realizes he is in real danger.
Kieran  asks his friend Emily Hart who is a young lawyer to help him find out what is really going on. As they get deeper into the mystery they decide they need more help. Ryan, who is Emily's father is a lawyer but he is no longer interested in being a lawyer. Ryan does  decide that he would help them because he has not talked to Emily in a long time and he really wants to speak to his daughter again.
They realize that they are facing an uphill  battle and real danger. This is fast moving and  very exciting read. I was very interested in the storyline.  The characters were very real and well described. I give this book a 4/5. I was given this book by Bethany House for the purpose of a review and all opinions are my own.
Posted by 3 Partners in Shopping at 6:52 PM