The Dead of Haggard Hall 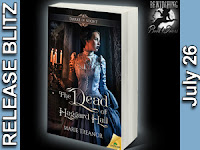 
Spirit possession is easy to remedy. Possession of the heart is another matter.


Once settled at Haggard Hall, Barbara finds her friend is beset by ghostly voices and unexplained deaths. In a maelstrom of dark spirits and wicked emotions, Barbara battles to lay Emily’s ghosts to rest—both hampered and helped by Arthur’s skeptical cousin Patrick, who provokes and attracts her in equal measure.


It would be a mistake to trust a secretive, guilt-ridden man suspected of driving his wife to suicide, if not outright murdering her. And it could well be lethal to give in to her own desires, confused as they often are with the lusts of the dead.


But Arthur and Emily are in genuine physical danger, and suspicion is falling closer and closer to Patrick—the man who haunts Barbara’s sensual dreams. The man who stands to inherit Haggard Hall.


Warning: Contains a medium whose body is open season for spirit possession, and a scandal-ridden journalist who only believes what he can see—and touch.

Marie Treanor lives in Scotland, in a chaotic house by the sea, together with her eccentric husband, three much too smart children and a small dog who rules them all. Most days, she avoids both housekeeping and evil day jobs by writing stories of paranormal romance and fantasy.