Her Black Wings The Dark Amulet Series Book One by A. J. Norris Book Tour and Giveaway 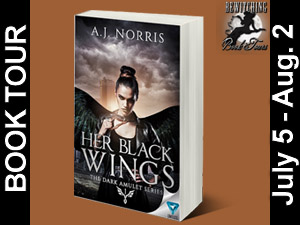 
A former runaway turned criminal, Amalya is murdered and thrust into a treacherous world full of red-skinned, horned beasts under the control of the Demon Ruler, Abaddon, instead of enjoying peace and serenity like she hoped. But saving a young child from a certain brutal death in the last moments of her life has earned her a chance at salvation.


Elliott the Redeemer wants no part in saving another soul…


After one too many failures at redeeming lost souls, the nail-biting, self-pitying Elliot has had enough of his work and would prefer to live out his eternity on Earth drowning in bourbon. It doesn’t matter that Amalya has grown black feathered wings signifying the good that still dwells within her. He can’t risk failure again.


She has to prevent the now grown child she saved from committing murder or risk returning to Netherworld with Abaddon for good. She can’t do it alone, though. Amalya needs the help of the angel sent to guide her, but their emerging love might not be enough to convince Elliot she’s worth the risk.


Amalya loves her black wings. She knows she’s meant to be an angel—and she will stop at nothing to prove it…


A.J. Norris is a romantic suspense and paranormal romance novelist. She began writing as a way to dim down the voices inside her head. She enjoys being able to get inside someone else's head, even a fictional one, and see what they see. Watching how her characters deal with difficult situations or squirm with the uncomfortable ones make the hard work of writing all worth it. She is a movie buff, especially book adaptations, loves watching her son play baseball and communing with other writers. She lives with her family who are extremely tolerant (at least most of the time) of all her late nights behind the computer.


(1) Tote with swag and autographed book

a Rafflecopter giveaway
Posted by 3 Partners in Shopping at 12:47 AM