Summary from Goodreads:No longer on Earth, Anna must now piece together her memories on the strange, new world of Enki. Guided by Julianus, the mysterious man who brought her back, she soon realizes this isn’t the same world she was starting to remember, making it even more difficult to figure out why she was sent to Earth. Will she be able to solve the mystery before the people who sent her away realize she’s back? Or will her memories forever remain lost? 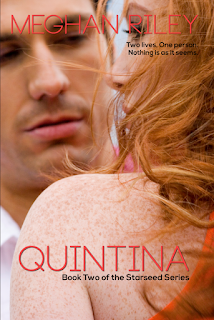 Anna (The Starseed Series #1) on Goodreads


The Starseed Series on Amazon:


Meghan Riley graduated with a bachelor’s degree in English from the University of Maryland and immediately pursued her lifelong passion for the written word. Her debut novel, Anna, presented itself as a way for Riley to inspire teenage girls to expand their interests beyond the typical teenage quandaries, ultimately encouraging females toward an interest in science. She is currently hard at work on the next book in The Starseed Series.

a Rafflecopter giveaway
Posted by 3 Partners in Shopping at 11:26 PM