Detective Brooke Daniel's first day in the Homicide Department began with the grueling discovery of unidentifiable human remains and continued with the Mayor's daughter being slain by a sadistic killer. The killer begins to taunt Brooke, as if he knows her personally, and the killings continue. The detectives soon dub him "the Ripper" because of his copycat behavior of the infamous Jack the Ripper, and he doesn't seem to be stopping any time soon.


Meanwhile, while hunting the Ripper, more unidentifiable remains are found and the homicide team soon finds itself hunting another kind of killer—an animal kind.


When "the Ripper" sets his sights on Brooke herself, who—or what—will save her? 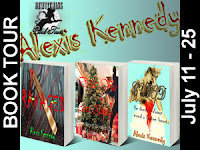 
When she was a little girl, Elena Davidson had to witness something no child should ever have to. On Christmas morning, she witnessed the murder of her parents from her hiding spot in their closet. The killer wore a ski mask, but he was eventually caught, and Elena would never forget the face of the man convicted—Jeff McCormick—because of the hideous scar running down his cheek and the bright orange hair that helped convict him. She would also never forget the coldness in his eyes, as he proclaimed his innocence on the witness stand, while being sentenced to sixty years imprisonment.


It's now twenty years later, and she's seen "the tall man" again—right before her house is broken into and a trinket of her mother's, missing since the day of her murder, is left behind—and right after similar grisly murders. This all brings about the questions—why is Jeff McCormick out of prison, and is he after her? Or was he telling the truth all along—and he really is innocent—and the real killer is after her? Either way, someone is breaking into homes and murdering couples in the Greenville, MS area.


With the help of Detective Brooke Daniels, and hunk FBI Special Agent Shane Braun, maybe Elena's haunting past can finally be closed—before it kills her.


Gavin Delray has a dark side, and many unfortunate and unsuspecting women are about to witness it. A scorned lover, he plans to use internet dating to search for his true love, all the while punishing those who won't measure up to the god of love, Cupid's, standards.


Detective Brooke Daniels has her hands full with the murders of young women piling up. Working with her gorgeous new partner, Dex Stone, and love interest FBI agent, Shane Braun—whom she has been keeping at arm's length—she risks her life in a dangerous undercover operation on the dating scene as she tries to find the connection that will lead her to the killer and just maybe even to her own heart's desire.


Another kind of killer, never flushed out, lurks in the woods once again as well. While trying to find their newest serial killer, the Homicide Team has to once again investigate what kind of being could be leaving bodies mangled in the area, including one of their own.


Alexis Kennedy is the fresh face of fiction. She writes thrilling and unique stories with twists and turns to keep you coming back for more. A talented author, Alexis knows how to please her readers.


Novels can sweep you off your feet and land you squarely in a new world. In the case of an Alexis Kennedy novel, that world is populated with compelling characters winding their way through a dynamic story. Her novels give you the opportunity to see the world from a different perspective, to be someone else, if only for an hour. Alexis’s writing transports you to richly realized lands full of love and intrigue, murder and mayhem.


Alexis lives in Missouri with her child and their beloved pet. She began writing poetry in her early teens and has been fascinated with writing ever since. Her novels reflect her education and love of writing, reading, learning, and living life to the fullest. She is a big follower of Karin Slaughter and James Patterson and she loves and enjoys reading books from Connie Mason and Shannon Drake.


Readers around the world seek out Alexis Kennedy’s books for their fast pace, exciting plot, and compelling characters. Today you can enjoy six books from Alexis, although rumor has it she is currently working on another six. Her books for purchase are: Bound Through Blood, Under the Blood Moon, Two Faced, and then from the Dial M for Murder Series: Ravaged, Déjà Vu, and Cupid. You will be captivated by her stories, and you won’t want to take your eyes off until the end