Daughter of the Sun


Cult of the Cat


Sixteen-year-old Trinity was born during a solar eclipse and left at the doorsteps of a convent along with a torn piece of papyrus covered with ancient symbols. Raised by nuns in the English countryside, she leads a quiet life until she’s whisked away to the Island of Cats and a grandmother she never knew.


But before they can get to know each other, her grandmother dies. All that Trinity has left is a mysterious eye-shaped ring. And a thousand grieving cats. As Trinity tries to solve the enigma of the torn papyrus, she discovers a world of bloody sacrifices and evil curses, and a prophecy that points to her and her new feline abilities.


Unwilling to believe that any of the Egyptian gods could still be alive, Trinity turns to eighteen-year-old Seth and is instantly pulled into a vortex of sensations that forces her to confront her true self—and a horrifying destiny.


One month before the summer solstice…


Goosebumps snaked up my spine.


I'd had the same sensation last night while gazing at the moon, when for an instant I’d picture it red, bathed in blood. Then the rippling, bristling feeling had come back this morning as I brushed my teeth and stared at the reflection of my eyes in the bathroom mirror. In a flash the green orbs had turned crimson. I’d blinked, struck by a wave of vertigo, the cold tiles shifting under my feet.


“Trinity...you all right?” Brianna nudged my arm, bringing me back to the present. We were walking down the main staircase of the orphanage—where we’d lived all of our lives—toward the open-air playground for our usual half-hour break after lunch.


“Maybe lunch did it. All those veggies. They take you for a rabbit.”


The touch of humor in her voice didn't lift the dark cloud hovering over me. I shot her a sideways glance. “No, not the veggies,” I muttered. “Something else.”


She stopped in the middle of the staircase and her hazel eyes studied my face. “What?”


“I saw you in the dormitory last night, staring out the window. You seemed so far away.”


The sky had been so clear, the stars twinkling like gems, so unusual for the common grayness of the English countryside.


I’d been mesmerized, as if its eerie splendor had spoken to me in an ancient, alien language. I hadn't been able to understand it, but I’d felt faint by its allure.


“It's nothing. You know me. One day up, one day down.” I looked to the bottom of the staircase, past the hall to the open doors to the courtyard. Now the sky was gray. The girls played outside, chatting incessantly. The little ones ran this way and that, their black and white uniforms a blur.


When I looked back at Brianna, I saw she was staring at something past my shoulder. I turned around and glimpsed a flash of black through the window.


“Did you see that?” I asked. “Looked like a limousine.” Not that I’d ever seen one in real life, only in the movies we were sometimes allowed to watch in the weekends. “I wonder if it’s coming here.”


But Brianna didn’t answer. Her spaced-out gaze was still fixed on the window. There was something odd about her expression.


She blinked, startled. She looked at me. “What? Oh. Right. You know…I just—I just remembered… I have to help Sister Anne at the library.”


I made a dismissive gesture with my hand. “Tell her you forgot.” I did feel a twinge of guilt. Sister Anne was one of the nice ones. “She's so old, she won't even remember.”


She didn’t answer, but I read the gentle reproach in her eyes.


She smiled and, to my surprise, gave me a tight, warm hug. “Cheer up. I don't like it when you get the blues. I want you to be happy.”


“Thanks,” I mumbled. Her chestnut hair, streaked with copper and gold and woven into a braid like we were all supposed to wear, smelled like soap, clean, fresh. Which reminded me: I had not braided my hair today.


Brianna was my best friend in the world. Nearly seventeen years ago, when we were tiny babies, we had been found at the door of the orphanage only a day apart—a very odd event, according to the nuns. When we were babies we were often put in the same crib and we sucked each other’s thumbs and took turns crying for attention.


We drew apart and she hurried up the stairs, the old wood creaking under the rubber soles of her shoes.


I moved in the opposite direction toward the courtyard.


Outside, the sky was covered with virulent clouds, promising a downpour. A cool breeze hit my cheeks, made me instantly alert. The air was redolent of fertilizers from the nearby farms. The temperature was unusually cold for late May. Sister Eveline and Sister Celeste already kept guard, but as one of the older girls, my duty was to keep watch during playtime. The courtyard was big and was enclosed by high, rusted, spiked iron gates crawling with vines and wisteria. Beyond the gates, on one side, a massive weeping willow loomed, its leaves rustling in the breeze. On another side, rolling hills made most of the landscape, dotted here and there with the silhouettes of nearby farms.


The courtyard was made of concrete and had swings and see-saws for the younger girls. The rest was just empty space with a few stone benches for us to sit.


The Sisters strolled across the courtyard toward the main doors, their heads tilted downward, deep in conversation—or so I thought. In their wimples and flowing habits, they looked like two big black birds. Sister Eveline suddenly turned toward me with a hard expression and made a gesture about my hair.


“I’ll braid it after the break,” I said, trying not to sound annoyed. I gave her a lovable grin and pointed to the younger children. “I have to keep an eye on them, as you know.”


The look she gave me told me she didn’t buy my sweet disposition, but she let it drop and continued her way to the doors.


I crouched and chatted with the little ones for a while, and pushed their backs at the swings. I giggled at their silly, innocent tales. Sophie, a sweet five year-old with red corkscrew ringlets, wrapped her small arms around me and I whirled her in the air.


When I put her down, I spotted Beth Thompson and her two evil minions emerging from the corner of the orphanage. A cat trailed behind her.


I narrowed my eyes. Beth had tied a string around the cat’s neck and was pulling it along like a pet—but, as I knew only too well, girls like Beth didn't keep pets.


Then Beth did something she shouldn’t have done: when the cat refused to budge, she yanked the string, almost choking the animal.


I winced, feeling the pain as my own.


A shiver rippled up my spine. Again. 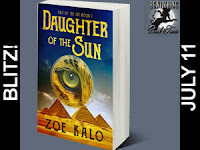 
A certified bookworm and ailurophile, Zoe Kalo has always been obsessed with books and reading. Reading led to writing—compulsively. No surprise that at 16, she wrote her first novel, which her classmates read and passed around secretly. The pleasure of writing and sharing her fantasy worlds has stayed with her, so now she wants to pass her stories to you with no secrecy—but with lots of mystery….


A daughter of adventurous expats, she’s had the good fortune of living on 3 continents, learning 4 languages, and experiencing a multicultural life. Currently, she’s working on a Master’s degree in Comparative Literature, which she balances between writing, taking care of her clowder of cats, and searching for the perfect bottle of pinot noir. She lives and writes in Belgium.