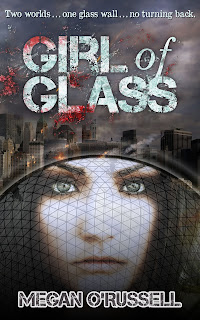 The human race has been divided. The chosen few live in the safety of the domes, watching through their glass walls as those left on the outside suffer and die. But desperation has brought invention, and new drugs have given the outsiders the strength to roam the poisoned night unafraid – but it comes at a price.


Seventeen-year-old Nola Kent has spent her life in the domes, being trained to protect her little piece of the world that has been chosen to survive. The mission of the domes is to preserve the human race, not to help the sick and starving. But when outsider Kieran Wynne begs for Nola’s help in saving an innocent life, she is drawn into a world of darkness and danger. The suffering on the other side of the glass is beyond anything Nola had imagined, and turning her back on the outside world to return to the safety of the domes may be more than she can stand. Even when her home is threatened by the very people Nola wants to help.

Megan O’Russell is the author of the young adult fantasy series The Tethering, and Nuttycracker Sweet, a Christmas novella. Megan’s short stories can also be found in several anthologies, including Athena’s Daughters 2, featuring women in speculative fiction.


Megan is a professional performer who has spent time on stages across the country and is the lyrist for Second Chances: The Thrift Shop Musical, which received it’s world premiere in 2015. When not on stage or behind a computer, Megan can usually be found playing her ukulele or climbing a mountain with her fantastic husband.