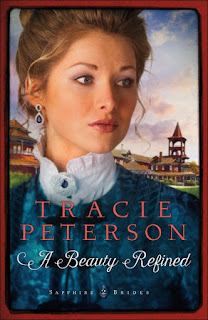 A Beauty Refined (Bethany House, July 2016)
What does it take to reveal the true beauty of a hidden gem?
Phoebe Von Bergen, the daughter of a German count, is excited to visit America for the first time while her father purchases sapphires in Helena, Montana. Little does she know, however, that her father’s intentions—both for her and the gemstones—are not what she thinks.
Ian Harper, a lapidary working in Helena, finds the dignified young woman staying at the Broadwater Hotel more than a little intriguing. Yet the more he gets to know her, the more he realizes that her family story is based on a lie–a lie she has no knowledge of. And Ian believes he knows the only path that will lead her to freedom.
Meeting Ian has changed everything for Phoebe, and she begins to consider staying in America, regardless of her father’s plans. But she may not be prepared for the unexpected danger that results when her family’s deception begins to unravel.
Learn more and purchase a copy.

Tracie Peterson is the bestselling, award-winning author of more than one hundred books. Tracie also teaches writing workshops at a variety of conferences on subjects such as inspirational romance and historical research. She and her family live in Montana.


Little does Phoebe know that her father's plans—for the sapphires and his daughter—are not what they seem. If you love historical fiction, romance, and adventure, don't miss Tracie Peterson's A Beauty Refined. When Phoebe meets Ian, everything changes. Yet the more he gets to know her, the more he realizes that her family story is based on a lie—a lie she has no knowledge of. And Ian believes he knows the only path that will lead her to freedom.

Join Tracie in celebrating the release of A Beauty Refined by entering to win her Precious Gems giveaway (details below) and by attending her author chat party on August 9!

One grand prize winner will receive:
Enter today by clicking the icon below. But hurry, the giveaway ends on 8/9. The winner will be announced at A Beauty Refined Facebook party. RSVP for a chance to connect with Tracie and fellow fans of historical fiction, as well as for a chance to win other prizes!

RSVP today and spread the word—tell your friends about the giveaway via FACEBOOK, TWITTER, or PINTEREST and increase your chances of winning. Hope to see you on the 9th!

My review;
I absolutely love all of the books that I have read by Tracie Peterson. "A Beauty Refined is no exception. Phoebe Von Bergen is in America for the first time. She has no idea that her father is hiding his real motives for being there from her. While she is there she meets  a man named Ian Harper and he knows more about her family's past than she does. Phoebe really has a lot of issues that she has to face. Her family has so many problems and she has never been told the truth by anyone she has trusted. As she finds out some of the secrets she finds herself in danger as well as others that she cares about. Will she be able to ever have a family that cares about her? Will she ever really be safe? I was give this book by Litfuse Publicity Group for a review and these are my opinions. I give this book  a 5/5. These are all my opinions.
Posted by 3 Partners in Shopping at 11:56 PM