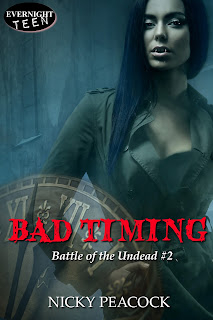 “You know now that monsters are real. Whether they have recently risen to reach for your flesh, or have chosen now to step from the shadows; you are surrounded by them. You also know that I am one too, but I’m all you’ve got and time is running out…”

There’s no rest for the wicked, especially in a zombie apocalypse. Britannia has used every vampire skill at her disposal to keep those she cares for safe, but with old enemies and unseen adversaries moving against her, she will have to push herself to both her physical and ethical limits to survive. Britannia is changing, but will it be for the better?

**Please note this is the second book in a series that should be read in order. **

14+ due to violence and adult situations 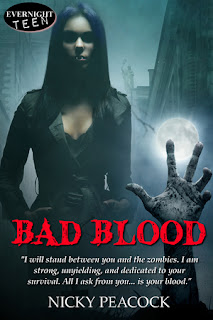 Bad Blood
Battle of the Undead #1
“I am Britannia. I am your protector. I will fend off the hungry hordes of undead hands that reach toward you. I am your steadfast defender. I will stand between you and the zombie masses as they try to taste your flesh. I am strong, unyielding, and dedicated to your survival. All I ask from you… is your blood.”

A 500 year bloody game of vengeance will need to be put on hold if vampires are to survive the zombie uprising. Bitter enemies, Britannia and Nicholas must work together to save un-infected humans, delivering them to a stronghold in Scotland.

Unable to drink the zombie blood, vampires need humans to stay alive. But will they tell the survivors who they are, and what they want from them? Will Britannia be able to hold back her vengeance? Is survivor Josh the reincarnation of Britannia’s murdered true love? And can she bring herself to deliver him to the safe hold?

*    *    *    *    *
About the Author:
Nicky is a published author of both YA and adult urban fantasy, paranormal romance and horror fiction. She lives in the heart of the UK, where she has run a writers' group for over 4 years to help new writers find their feet on the path to publication. A member of both the Society of Authors and the British Fantasy Society, Nicky has had over 30 stories published in various anthologies. Bad Timing is her second book in the Battle of the Undead series published through Evernight Teen. She loves to talk to readers, so please feel free to either get in touch with her through her blog, or on any of the social media below.

a Rafflecopter giveaway
Posted by 3 Partners in Shopping at 10:43 PM