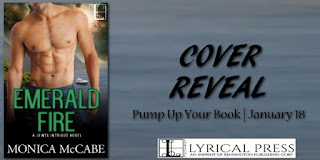 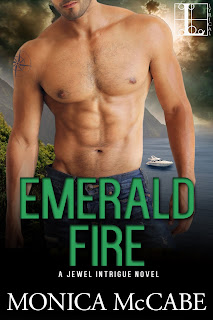 Chloe Larson is a historian obsessed with clearing the name of her grandfather, eight generations back. After his heroic exploits during the Prussian Wars his life slid sadly into oblivion and madness, taking with him the location of a queen’s priceless emerald jewels. But the discovery of a cryptic two-hundred year old journal written by a man history declared insane might offer a clue.

Finnegan Kane is a top-notch marine bounty hunter on the hunt for the Emerald Fire, a 120-foot Sunseeker yacht stolen by ruthless Caribbean pirates. It’s the kind of dirty work that keeps his antique ship restoration business afloat, but that doesn’t mean he has to put up with the fiery demands of an admittedly gorgeous historian. But when Chloe offers the one thing that practically guarantees success—the GPS coordinates of the Fire’s location—he has no choice but to forge into uncharted waters.

With danger at every turn, Chloe and Finnegan must battle against the odds to decipher a historical legacy and settle a score against a family gone mad.

Do you like stories set in unusual or exotic locations? How about unique or interesting occupations? Combine both, wrap them around romance and adventure, and that’s the kind of reading that takes you places!

It’s also a style of writing for Monica McCabe. Always a bit of an adventuress, she’s lived in and explored places like Alaska, Hawaii, Montana, Florida, Mexico, California, Maine, Washington, Canada, and yes, even Las Vegas. At every location she seized the opportunity to explore, hike, camp, raft, canoe, fly, ski, scuba-dive, or zip-line. She’s climbed glaciers and ancient Mayan pyramids, dived shipwrecks and reef caves, camped in sasquatch country, drove across the USA three times, and is now working on gathering as many official stamps in her National Park passport as she can. So far, nineteen and counting.

Also an avid reader, the writing bug bit her hard somewhere between Alaska and Montana. Slowing down enough to actually put words on paper took a while longer. She scribbled notes, played at writing a historical romance (her favorite reading), but it wasn’t until she landed in Tennessee that writing became a passion.

Now that she’s sprouted roots alongside her husband of seventeen years, tossed in two lazy cats and two happy dogs, she’s finally turned that wanderlust into crafting stories of adventure and romance. And all that travel and exploration lends realistic detail to her writing. Plus she’s been known to sneak in a bit of her own experience, and a pet or two, because they like the fame.