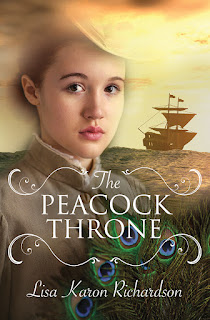 When Miss Lydia Garrett's guardian is murdered, and the authorities refuse to investigate the odd circumstances, she vows to catch the culprit. The same night the Earl of Danbury is murdered in his bed. Against all odds it appears that the murders are related--and Anthony Douglas, the new Lord Danbury, is bent on revenge. The clues point to the former earl’s first naval command. In 1758 the earl...

"The Peacock Throne" by author Lisa Karon Richardson is a very interesting story. I really liked this storyline and I think the characters were interesting. Miss Lydia Garrett has a guardian who is murdered while on the same night the Earl of Danbury is found dead. Could they be somehow connected to each other?  She is very upset that the police will not try to find out who murdered him. The new Lord of Danbury is looking for retribution and wants to find his father's killer.  Miss Lydia makes up her mind and decides that she is going to find the murderer herself. This book has action, suspense and some romance. I give this book a 5/5. I was give this book for a review by Kregel Publications Company and these are all my opinions.
Posted by 3 Partners in Shopping at 10:34 PM