Fans of Meg Cabot's Princess Diaries will enjoy CAPTURED, a New Adult Contemporary Romance with a modern royals flair by award winning author Jennifer Chance. Lauren Grant is a hard-partying celebutante dedicated to avoiding anything that might tie her down, but Dimitri Korba, the gorgeous and arrogant captain of the Garronia National Security Force and her unwanted bodyguard just might change her mind in this new installment in Chance's Gowns & Crowns series. 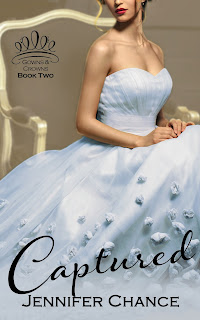 
For beautiful, pampered Lauren Grant, the idea of love without strings is a fairy tale and a trap. Though she’s skillfully maintained her image as the carefree celebutante, for years she’s been systematically stalked by the richest—and most ruthless—golden boy of the Jet Set. To stay one step ahead, she’s used every resource at her disposal. But now, stuck in Garronia with the whole world watching, she’s finally cornered by her nemesis, with no way out.


Well, no way out but one: the stubborn, forceful, impossibly gorgeous captain of the Garronia National Security Force, Dimitri Korba. The first man she’s ever trusted… which makes him the most dangerous man of all.


Dimitri Korba’s greatest duty is to keep those in his care safe. Since losing his closest friend, he's vowed that he will not fail another. Not even the haughty, foolhardy American blonde whom he can’t get out of his mind. And once Dimitri glimpses the terror Lauren hides behind her icily perfect façade, protecting her becomes his only goal.


Dimitri has no idea how far his commitment will take him, however, nor how powerful his need for Lauren will flare when she’s not only in his care, but in his arms. With each stolen moment, the danger around them intensifies, burning away every doubt…until all that remains is their fierce, unexpected passion. But will that be enough to save them?


Dimitri’s lips twitched as Lauren trotted up the steps, and he wasn’t able to wipe his expression fully clean before she saw him. “You’re looking satisfied.”


He leaned forward with his elbows on the railing and gestured to the sun. “It’s almost sunset. There is much to be satisfied about.”


“Hmm.” She swiveled to take in the sun as well, her face half-hidden by giant sunglasses. “You do this every day? Just, you know, stand here and watch the sun go down?”


“No. We only do it on the days when we wish to be good to ourselves. The rest of the time, we make do with a lesser life.” He held out his hands. “Let me take your things and put them inside. I will get us both a beer so we can celebrate the sunset appropriately.”


She willingly handed him her shopping bag, then hesitated with her purse, keeping it close to her body. “I’m good with this. But thank you.” He had no choice but to take her bag and retreat. Dropping it inside the door, he fetched the beers quickly enough as his mind clicked through the possibilities. He needed to see the phone, before they were to meet others. And that would be after sunset, so he didn’t have a lot of time.


How could he get Lauren worked up enough that she demanded a shower before she saw anyone else?


The solution was, of course, obvious. He’d always been known for his excellent ideas in the field. It was good to know that his instincts did not fail him while he was on leave.


He pulled the tops off the beers and headed back outside.


Lauren was sitting on one of the sling chairs, angled toward the sun. A thin crawl of clouds had surfaced on the horizon, running purple against the water. It looked more beautiful than any photograph he’d ever seen, and he’d watched tourists try to capture the magnificence a thousand times over. Some things, you had to experience in person.


“It’s pretty, I guess.” Her smile softened her sarcastic words, and when he held his beer out to her, she clinked hers against it. “What are we toasting to?”


“To a perfect sunset. It’s enough.” Instead of taking a seat beside her in the matching swing chair, though, Dimitri folded his body to the porch, his head level with Lauren’s knees as he lounged back on one elbow. He was close enough to her body to feel her heat, sense her sudden tension. But it wasn’t the tension of a frightened woman, he thought. Simply one who was uniquely, subtly aware of him.


He took a long pull on his beer. He could work with that. 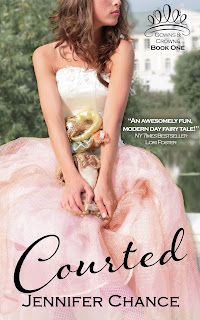 Be sure to check out COURTED, book #1 in the Gowns & Crowns series by award winning author Jennifer Chance!


Aspiring concert violist Emmaline Aurora Grace Andrews is torn between her love of family and her love of music. A year ago, she deferred entering a prestigious graduate program to help her parents recover from a devastating accident. Now the deferment is expiring, but her parents still need her. Worse, every time she plays her audition piece, she mangles it. Is it too late to be the musician she'd always dreamed of? Should she even try?


Prince Kristos Andris was a respected captain in his nation’s military… Was. In the wake of the tragic death of his elder brother, he's managed to avoid his duties as the new Crown Prince of Garronia for months. But now he must accept his responsibilities and leave his troops behind. Outraged at the restrictions of his new royal position, he'll do anything for one last adventure. So when opportunity suddenly lands in his arms in the form of a dreamy-eyed American girl, he embraces it (and her) for all he's worth. What's the harm in a quick fling, after all? It won’t change what he knows he must do…


Only this is Garronia in the summertime, where passion has a way of ruining even the most sensible of plans. 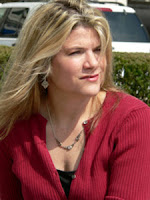 
Jennifer Chance is the award-winning author of the new adult Rule Breakers series as well as the modern royals Gowns & Crowns series. You can find her online at JenniferChance.com, on Facebook at facebook.com/authorJenniferChance and on Twitter at @Jenn_Chance.


Jennifer is offering up some fabulous prizes during her Captured Virtual Blitz event. One (1) lucky grand prize winner will receive a $25 Gift Card for Amazon or B&N (winner’s choice) and two (2) runner-ups will win an eBook copy of Courted, book #1 in Jennifer’s Gowns & Crowns series! To enter, simply fill out the Rafflecopter below: