Title: Mirror World
Author: John Calicchia
Publisher: Psychangel Books
Pages: 404
Genre: YA Fantasy
What would you do if you saw the future apocalypse of the world in a mirror? Would you try to save the world and those you love, or die trying? 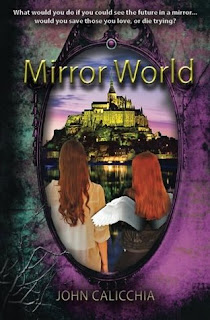 Welcome to my life, this is the vision of the future I've been cursed to see.    – Cailyssa Larkin

When Cailyssa Larkin looks in a mirror she has an ominous feeling that someone is watching her. Stranger still, she has visions that foretell the future. While visiting her Uncle Spencer, Cailyssa gazes into a mirror and sees a dark future that only she can change. With the future of her own world hanging in the balance, Cailyssa bravely enters the portal to the Mirror World. Here, the Dark Lord controls all the mirrors and bends reflections so all creatures see evil within themselves. With her sister Terry, her mysterious best friend Daemon, and a host of weird and wonderful creatures, Cailyssa embarks on an epic quest to overcome the evil forces trying to destroy her world. She can only defeat the Dark Lord by finding her true self and discovering the family secret that has led her to Mirror World.

This book, written by a psychology professor, integrates famous psychological studies in the story. Readers will enjoy learning important life lessons through the psychological concepts illustrated in the book.

Book Excerpt:
“You’re not getting away so easily.” I ran after him, grabbing his shoulder and spinning him around. “You’re the most confusing man I’ve ever met. One moment you’re cold as stone—pretending that I don’t exist—and the next moment you’re on one knee, and it looks like you’re ready to propose to me. Listen, I don’t need a boyfriend, but I do need some answers!”
“I will only do so if you require it of me,” Daemon said as he turned back into the cold soldier boy. “But please don’t require me to explain, I beg of you. It is still too painful for me.”
“No deal, big boy. If you’re tough enough to pull an arrow out of your chest and heal yourself from a sword fight, I think you are strong enough to talk to your best friend and explain things. So talk. I require it…and no more kissing my hand!” I said with great determination.
To my surprise, Daemon slowly unbuttoned his shirt and took it off. My jaw dropped to the ground, not because I was looking at his perfectly chiseled chest of course, but because I just never knew what to expect from this man. He slowly turned around and showed me two long scars on his back that looked like a letter V. He slowly turned back to face me. “Cailyssa, didn’t you ever think that it’s a bit odd that we have the same birthday?” Daemon said this as if he expected an answer.
“No, I just figured it was a coincidence, and it was always kind of cool to celebrate my birthday with my best friend. What’s the big deal, anyway?” I said as I awaited more information.
“Although it is a vague memory in my mind, my life before I was born into your world was filled with great sadness. I did something horrible, something that is unforgivable,” Daemon said.
“What do you mean your life before you were born—like when you were in your mother’s belly or something?” I was perplexed.
“I don’t have a mother, Cailyssa, only humans do,” Daemon said earnestly.
My specular skills started to tingle, and I started to see some images in my mind. They were beautiful but very frightening to me. I blurted, “What do you mean? You’re not human? Are you some kind of alien or something?” I tried to say this as I laughed confidently, but I was scared of what I would find out.
I focused on the inside of my mind and tried to organize the various images that floated by. I captured one of Daemon as he was before he was born into my world. My jaw hung open, and I tried to form the words but I had great difficulty doing so.
“You’re an, an, an…angel?” I asked in disbelief. 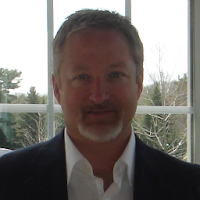 
I’m John Calicchia and I write stories of fantasy, action and adventure. In the fall of 2015 my book Mirror World was released! It's a story of two powerful young sisters and their epic battle against evil. But, this book has something in it most do not: hidden secrets. It's a teen and young adult fiction book with a self-help book hidden inside. You see… after publishing in psychology books and journals for decades I felt my writing was not helping the young people I love to work with. So, I took famous psychology studies and put it in the characters and plot in Mirror World. As you become part of the story you can learn about psychology or you can just enjoy the story! You can also get a free copy of the users guide to help you understand the psychology behind the book by joining my website www.johncalicchia.com


John Calicchia Ph.D. is a professor of psychology who also works with children and young adults as a licensed psychologist. He lives near Boston with his lovely wife and two amazing daughters. You can usually find him in the pool swimming with his two big dogs.

GIVEAWAY! John Calicchia is giving away 2 $25 Amazon Gift Cards! Terms & Conditions: By entering the giveaway, you are confirming you are at least 18 years old. Two winners will be chosen via Rafflecopter to receive one $25 Amazon Gift Certificate This giveaway begins January 4 and ends March 31. Winners will be contacted via email on February 1. Winners have 48 hours to reply. Good luck everyone! ENTER TO WIN!

"Mirror World"by author John Calicchia tells the story of Cailyssa Larkin a young girl who has a bad feeling that she is being watched. She also thinks she is having visions of future events. She is at her uncle's house when in a mirror she sees a very bad place. She finds out that she has to be the one to change the future. Because she has no other options, she ventures into the Mirror World. In this world there is a Dark Lord who makes all mirrors only show the evil in everyone. She has the help of her sister, Terry, and her friend Daemon but, she is the one who has to figure out how to defeat the Dark Lord. I give this book a 5/5. I was given this book for a review and all opinions are mine.
Posted by 3 Partners in Shopping at 11:59 PM