Daughter of Blood by Helen Lowe Blog Tour and Giveaway 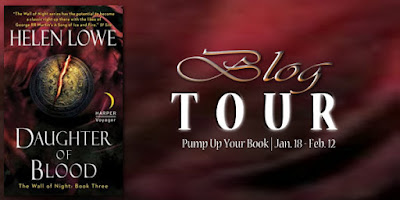 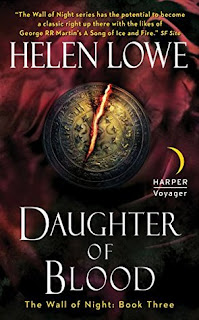 Malian of Night and Kalan, her trusted ally, are returning to the Wall of Night—but already it may be too late. The Wall is dangerously weakened, the Nine Houses of the Derai fractured by rivalry and hate. And now, the Darkswarm is rising . . .

Among Grayharbor backstreets, an orphan boy falls foul of dark forces. On the Wall, a Daughter of Blood must be married off to the Earl of Night, a pawn in the web of her family's ambition. On the Field of Blood, Kalan fights for a place in the bride's honor guard, while Malian dodges deadly pursuers in a hunt against time for the fabled Shield of Heaven. But the Darkswarm is gaining strength, and time is running out—for Malian, for Kalan, and for all of Haarth . . . 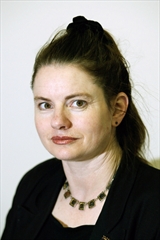 Helen Lowe is an award-winning novelist, poet, interviewer, and blogger, whose first novel, Thornspell (Knopf), was published to critical praise in 2008. Her second, The Heir of Night (The Wall of Night Series, Book One) won the Gemmell Morningstar Award 2012. The sequel, The Gathering of The Lost, was shortlisted for the Gemmell Legend Award in 2013. Helen has a second-dan black belt in the martial art aikido and represented her university at fencing.

She posts regularly on her ". . . on Anything, Really" blog, occasionally on SF Signal, and is also on Twitter: @helenlowe.


Helen is giving away print copies of The Gathering of the Lost & The Heir of Night US ONLY Terms & Conditions:


By entering the giveaway, you are confirming you are at least 18 years old. One winner will be chosen via Rafflecopter to receive both copies – US ONLY


This giveaway begins January 18 and ends on February 12. Winners will be contacted via email on February 13. Winner has 48 hours to reply.

Good luck everyone! ENTER TO WIN!