About Elementals: The Prophecy of Shadows:


Title: Elementals: The Prophecy of Shadows 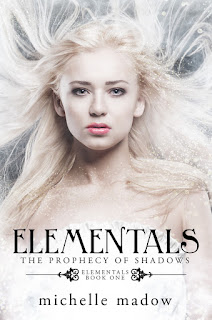 Filled with magic, thrilling adventure, and sweet romance, Elementals: The Prophecy of Shadows is the first in a new series that fans of Percy Jackson and The Secret Circle will love!


When Nicole Cassidy moves from sunny Georgia to gloomy New England, the last thing she expects is to learn that her homeroom is a cover for a secret coven of witches. Even more surprisingly … she’s apparently a witch herself. Despite doubts about her newfound abilities, Nicole is welcomed into this ancient circle of witches and is bedazzled by their powers—and, to her dismay, by Blake—the school’s notorious bad-boy.


Girls who get close to Blake wind up hurt. His girlfriend Danielle will do anything to keep them away, even if she must resort to using dark magic. But the chemistry between Blake and Nicole is undeniable, and despite wanting to protect Nicole from Danielle’s wrath, he finds it impossible to keep his distance.


When the Olympian Comet shoots through the sky for the first time in three thousand years, Nicole, Blake, Danielle, and two others in their homeroom are gifted with mysterious powers. But the comet has another effect—it opens the portal to the prison world that has contained the Titans for centuries. After an ancient monster escapes and attacks Nicole and Blake, it’s up to them and the others to follow the clues from a cryptic prophecy so that they can save their town … and possibly the world.


Michelle Madow grew up in Baltimore, graduated Rollins College in Orlando, and now lives in Boca Raton, Florida. She wrote her first book in her junior year of college, and has been writing novels since. Some of her favorite things are: reading, pizza, traveling, shopping, time travel, Broadway musicals, and spending time with friends and family. Michelle has toured across America to promote her books and to encourage high school students to embrace reading and writing. Someday, she hopes to travel the world for a year on a cruise ship.


To get instant updates about Michelle's new books, subscribe to her newsletter and follow her on Amazon!


"Elementals: The Prophecy of Shadows" by author Michelle Madow is a novel with a great storyline and a book that is not only for young adults but also for anyone who likes a book with a nice romance, magic and good witches. Nicole Cassidy had no idea that she was a witch until she moved to New England from Florida. She is lucky to be accepted by the rest of the coven that use her homeroom as a secret place to not be discovered.  When a comet appears some of them realize they have new stronger powers, but it has also let out Titans from their prison that has held them for 100's of years. She must with others defeat these monsters so that the world can be saved. I really enjoyed this which is the first book in this new series. I give this book a 5/5. I wish I could give higher. I was given this book for a review and all opinions are mine.