Oath of a Scottish Warrior 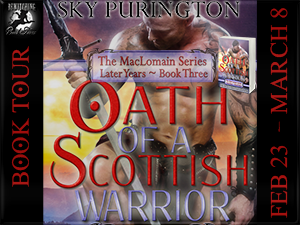 
Haunted by childhood memories and the fact she is likely going mute, Erin embraces a quiet life in Vermont away from all the mistakes she has made and the people she’s hurt. A peaceful existence with her horses. A cynic by nature, she doesn’t buy into what she soon learns. Apparently she’s part of an unending connection between twenty-first century Broun women and medieval MacLomain men. When a Claddagh ring crosses her path, she’s compelled to steal it. A bad move because the ring is meant to find true love. Something Erin feels she stopped deserving a long time ago.


Of dragon blood, Chieftain Rònan MacLeod is by birth, half MacLomain. While raised to protect the future King of Scotland, he lives life with an open mind. The idea of a ring binding him to one lass seems far-fetched. However, when a woman named Jackie calls to him from the dark edges of the Celtic Otherworld, he swears an oath to save her. That means traveling to the future to protect her before she’s taken by the enemy. The only problem? She is not where she should be. Instead, he finds a beautiful, defiant lass named Erin. Now he must make a choice. Continue seeking out Jackie or protect the one he’s with.


Thrust back in time to ninth-century Scandinavia, Rònan and Erin find sanctuary with his Viking ancestors. With help from not only King Naðr Véurr Sidgir but his offspring, they learn more than anticipated. Something that will either damn them or set them free. Drawn to one another, heat flares. A fire neither could have imagined. Scorching. Searing. Unavoidable. One they must fight if they want to save those they care for most.


Will they be able to protect wee Robert the Bruce from evil when they end up back in Scotland? Or will their repressed feelings be their ultimate doom? After all, it’s supposed to take the oath of a Scottish warrior to save a future king. Not the oath of a warrior who ended up forsaking all because he lost his heart along the way.


Erin almost overfilled the mug as she watched him out of the corner of her eye. Damn, he was hot as hell. Desire flared as she eyed his snug leather pants, and broad, muscled, tattooed chest and arms. She swallowed. Maybe leaving him outside would have been a smarter move.


Rònan inhaled sharply then released a long, slow breath as he closed his eyes, shook his head, and whispered, “Gods give me strength, you smell good.”


Doing her best to keep her eyes averted, she held out a mug. “Here, drink. It’ll help warm you.”


“Many thanks.” He took the mug. “Will you not look at me then? You did so outside and we managed through.”


“Likely because I had a blade to your neck,” she reminded.


“If I’ve the strength to look at you then you’ve the same strength, lass,” he said. “Please.”


“Not gonna lie. I’m too damned aroused.” She shook her head and turned away. “Drink your ale and warm yourself, Rònan.”


He growled in frustration. “We need to push past this if we’re to protect the Bruce as we should.”


“We don’t need to look at each other to protect Robert.”


“Aye, but we do.” He downed the ale in a few gulps. “Especially if we’re to battle alongside one another. Eye contact is important.”


She hated to admit it but he was right. “I’ll get there. Promise. It just doesn’t look like it’ll be happening right now.” Though it was about the last thing she wanted to say for more reasons than one, she said, “Why aren’t you still with the redhead? After you warm up, it might be best if you rejoin her.”


“Nay.” He refilled his mug and handed her one as well. “While she was pleasant enough, I couldnae seem to muster desire for her.”


Erin almost cursed when a rush of satisfaction blew through her. “You two seemed to be doing just fine dancing.”


“Only because I meant to make you jealous,” he whispered. “Because I felt the same when I saw you with Darach and the Vikings.”


Though she should have been surprised by his bluntness, she wasn’t. Like her, he accepted what simmered between them for what it was. Simple lust based on dragon blood.


“Well, you’ve got nothing to be jealous of because Darach and I are just friends and me and my Viking posse have an understanding.” She took several sips as she navigated around him to the fire without meeting his eyes. “All that aside, we both need to remember that not only is what we’re feeling nothing more than a dragon thing but that Jackie’s out there somewhere waiting for you.”


“Viking posse?” he murmured. “Is that what you’re calling Tait and Bjorn?”


“Why did you not take Tait tonight?” Rònan’s question was a deep rumble close to her ear as he moved behind her. “I know he offered and I know you were tempted to accept.”


Right. Because their thoughts mingled.


“You know the answer to that,” she said softly because she didn’t trust her vocal chords.


“Aye,” he said. “You think it would have complicated things had you taken Tait to your bed but I dinnae ken that. Mayhap it would have eased the ache you suffer now? Would easing that ache not make it easier to focus on what lies ahead?”


She was tempted to turn and confront him but stayed put. “Not if I ended up having stronger feelings for him because of it. Who knows, there’s a good chance I wouldn’t want to leave here if I did.”


“I saw how you were with the wee Bruce earlier,” he said. “So I dinnae doubt you would do whatever was needed to protect him.”


“How did you see?” she started then shook her head. “You never really left with the redhead did you?”


“I dinnae want the redhead,” he murmured, words still close to her ear, his body a warm wall at her back. “I want you, lass.”


Erin closed her eyes and focused on breathing evenly. “No, you want Jackie.”


“Aye, part of me,” he admitted. “But it feels more like desiring a figment of my imagination. ‘Tis nothing like what I feel now. Here.” His hand fell on her shoulder. “With you.”


Hell, this was pure torture.


Blood rushed through her veins so rapidly she grew lightheaded.


“I can’t.” She shook her head but couldn’t manage to step away, could not get her feet to work. “What if you and Jackie are meant for one another? I love that woman to death and would hate myself if…”


Save for the crackling fire and howling wind, the room grew quiet as her unsaid words hung in the air. As if his feet were as glued to the floor as hers, Rònan didn’t move for several long moments. Yet he eventually stepped away, his voice soft. “You’re right, lass. ‘Twould not be right.”