In the year 1956, Anastacia Fotopoulos finds herself pregnant and betrayed, fleeing from a bad marriage. With the love and support of her dear friends Stavros and Soula Papadakis, Ana is able to face the challenges of single motherhood. Left with emotional wounds, she resists her growing affection for Alexandros Giannakos, an old acquaintance. But his persistence and unconditional love for Ana and her child is eventually rewarded and his love is returned. In a misguided, but well-intentioned effort to protect the ones they love, both Ana and Alex keep secrets - ones that could threaten the delicate balance of their family.


The story continues in the 1970’s as Dean and Demi Papadakis, and Sophia Giannakos attempt to negotiate between two cultures. Now Greek-American teenagers, Sophia and Dean, who have shared a special connection since childhood, become lovers. Sophia is shattered when Dean rebels against the pressure his father places on him to uphold his Greek heritage and hides his feelings for her. When he pulls away from his family, culture and ultimately his love for her, Sophia is left with no choice but to find a life different from the one she’d hoped for. 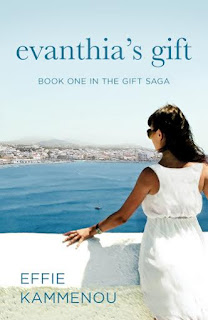 
Exceptional, outstanding and award worthy were the first words that popped into my mind after I finished reading this book. A surface description of this story could be easily stated by saying; it’s a 50 year generational Greek family saga that’s filled with multiple love stories, devastating betrayals and heart breaking secrets. That depiction alone would be enough for anyone to be drawn to this book. But the essence of “Evanthia’s Gift” is held within each character created in this masterpiece; that is the true heart and soul of this book. I could feel the struggles within each to come to terms with their past mistakes, recognizing their self-worth, all the while staying steadfast to their beliefs and for some, finding inner peace. I started reading this book late one evening with the intent of reading a few chapters and then going to bed. I found myself incapable of putting the book down… several hours later I was wiping away the tears to get through the last chapter.


This superbly written emotional story comes full circle in the end, which reminds us all just how precious love and family really is.


The air was unusually chilled for early November in NYC, but despite the dropping temperature, sweat trickled down the back of Anastacia’s neck. Unable to wish away the nausea that was taking hold of her and too ill to sit through her last class, she’d left the NYU campus, hopping on an uptown subway to return home for the day. She’d been lightheaded and queasy the past few days, but nothing as violent as what she was currently feeling. Waiting at the crosswalk, the aroma of garlic and cheese permeating from a nearby café antagonized the volcano that was about to erupt in her belly, and she prayed she would get home without incident.


At last, Anastacia ducked into her apartment building, closing her eyes, and offering a silent thank you to the heavens for the safety and comfort of her home. Once inside her foyer, she removed her coat, hung it in the closet and glimpsed herself in the mirror hanging over the Bombay Chest. Pale skin and sunken eyes replaced her usual olive complexion and healthy glow.


I just need to sleep off whatever this is.


Her husband, Jimmy, was not expected home from work for several hours, and she hoped to be feeling better by then.


Suddenly, the sound of voices startled her. She walked through the living room, following the noise. She almost forgot the motion sickness that forced her home earlier than usual as the guttural sound of rhythmic moans grew louder, interrupted only by a woman’s shrill laughter. Anastacia forced her legs to follow the cacophony and found herself at the doorway of her bedroom. She stood there frozen. Seeing, but not believing. Tears sprang to her eyes and dripped down her cheeks, and she began to shake uncontrollably. Anastacia attempted to speak, but bile rose to her throat, rendering her incapable of uttering a word. Then, a cry that seemed to escape from her very soul, revealed her presence.


In that second, they knew she’d witnessed their betrayal. Anastacia was taken aback by the look of pure satisfaction that flashed across the naked woman’s face. A face that held not even a hint of guilt or remorse.


Her husband’s face told a different story. Shock, fear, maybe regret. For getting caught. It couldn’t have been more than a few seconds, but so many thoughts bombarded her mind that it was as though she were moving in slow motion. But then, the impact of it all slammed into her, and she ran.


Jimmy jumped up, wrapping himself in a bed sheet.


Barely making it to the bathroom, Anastacia leaned over the toilet, expelling the contents of her stomach.


“Ana,” Jimmy pleaded, coming up beside her.


“Get away from me.” She wiped her mouth with a towel, straightened up and gathered all her strength to push past him.


“Don’t touch me or ever say that to me. You’re disgusting. You both are.” She ducked under his arm, but he grabbed her wrist.


His touch seared her to the bone and she pulled away. She was shamed, shaken—broken, but there was no way she was going to let him see it.


“I said don’t touch me. Never come near me again.”


“It looked like it was both of you. Now let me pass,” she spat. He lifted his hands in surrender and stepped aside as she pushed her way past him through the narrow bathroom doorway.


In the hallway, the woman stood, watching, gloating. Although she and Anastacia both had dark brown hair and similar Mediterranean features, she lacked the poise and grace that Anastacia exuded.


“Get out of my home,” Ana ordered her. “I never want to see you again.” Anastacia stormed out her front door, slamming it behind her. Doubling over, she thought she might heave again, but she drew in a deep breath and continued down the hall to Soula’s apartment. She frantically knocked on the door. When she opened it, Soula took one look at her best friend and she hugged her.


Between gasps and cries, Anastacia relayed the entire humiliating scene, as well as Jimmy’s despicable attempt to explain the unforgivable.


“We go upstairs and talk to your uncle,” Soula said. “He will know how to handle this.”


“How can I tell him? What will my parents say? How could I be so stupid? What will Uncle Tasso think?”


“Of you?  Nothing different than before. Of them?  They will get what they deserve.  Come. We will go together. I will tell your uncle if you cannot.”


Effie Kammenou is a first generation Greek-American who lives on Long Island with her husband and two daughters. When she’s not writing, or posting recipes on her food blog, cheffieskitchen.wordpress.com, you can find her cooking for her family and friends.


Her debut novel, EVANTHIA’S GIFT, is a women’s fiction multigenerational love story and family saga, influenced by her Greek heritage, and the many real life accounts that have been passed down. She continues to pick her father’s brain for stories of his family’s life in Lesvos, Greece, and their journey to America. Her recent interview with him was published in a nationally circulated magazine.


As an avid cook and baker, a skill she learned from watching her Athenian mother, she incorporated traditional Greek family recipes throughout the book.


She holds a Bachelor’s Degree in Theater Arts from Hofstra University.

"Evanthia's Gift" by is Book One in the Gift Saga by author Effie Kammenou is a fantastic story of a family with many secrets. The secrets that they kept from each other for many years were because of the love they have for each other. Ana is a woman who is betrayed but, can find love again if she could learn to trust again. I loved this book and I loved the characters. I cannot wait to read Book Two. I was given this book for the purpose of a review and all opinions are my own. I happily give this book a 5/5.
Posted by 3 Partners in Shopping at 11:52 PM