In the Dark by Chris Patchell Book Tour and Giveaway 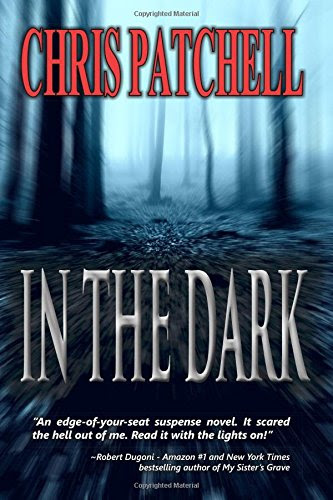 When the worst happens and her daughter goes missing, a mother will do anything to find her… Marissa Rooney’s daughter, Brooke, has been missing for days. Her roommate hasn’t seen her since that night in the bar. Standing in the middle of her daughter’s dorm room with a half-used vial of insulin clenched in her hand, Marissa comes to the terrifying realization that if she has Brooke’s insulin, it means that Brooke does not. The missing person’s investigation takes a sudden and deadly turn when the police discover the body of another college student who went missing a week before Brooke. Desperate to find her daughter, Marissa fears time is running out. But she isn’t alone in her terror. A phantom from Marissa’s past is lurking in the shadows, waiting in the night, and holding her family captive... In the dark. "An edge-of-your-seat suspense novel. It scared the hell out of me. Read it with the lights on!"–Robert Dugoni, Amazon #1 and New York Times bestselling author of My Sister's Grave. When Chris Patchell isn't hiking in the Cascade Mountains or hanging out with family and friends, she is working at her hi-tech job or writing gritty suspense novels. Writing has been a lifelong passion for Chris. She fell in love with storytelling in the third grade when her half-page creative writing assignment turned into a five-page story on vampires. Even back then Chris had a gift for writing intricate plots that were so good her father refused to believe she didn't steal them from comic books. Years later, Chris spent long afternoons managing her own independent record store and writing romance novels. After closing the record store and going to college, Chris launched a successful career in hi-tech. She married, had kids but amid all the madness, the itch to write never really went away. So she started writing again. Not romance this time – suspense filled with drama, and angst, speckled with a little bit of blood. Why suspense? Chris blames her obsession with the dark on two things: watching Stephen King movies as a kid and spending ridiculous amounts of time commuting in Seattle traffic. "My stories are based on scenarios I see every day, distorted through the fictional lens. And my stories come with the added bonus of not having to be restrained by socially acceptable behavior." Recipient of the 2015 Indie Reader Discovery Award for DEADLY LIES.


To learn more about Chris and her books, visit:


Don't Miss Out On Your Chance to Win In the Dark!

This is a rafflecopter giveaway hosted by Partners In Crime Virtual Book Tours for Chris Patchell & 2 Market Books. There will be 5 winners of an eBook copy of In The Dark by Chris Patchell. The giveaway begins on Feb 1 and runs through March 2, 2016.