Evangeline Black quickly becomes entangled in the magic that thrives in Gnome, Mississippi, when she spontaneously shifts into a wolf only hours after arriving.


Her life is out of control, and she has to rely on the kindness of strangers: the psychic caretaker of the lovely antebellum home where her mother was born, the sheriff who practices his own version of Native American-inspired magic, and a rocker werewolf. While she struggles at the bottom of the magical learning curve, it becomes apparent that someone is stalking her.


Evangeline quickly learns two things about Gnome. The first is that anything is possible. The second is that magical creatures are much less enchanting when they want you dead. 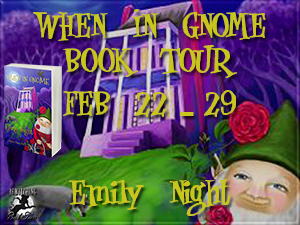 
Ben never showed as he had promised, and when I shifted in my sleep, I was apprehensive at the thought of facing the night alone. As I flew past Daniel in the living room, I noticed a look of concern on his face, and the words “be careful” were stretched into a long, low mournful sound.


Once I hit the outskirts of the yard and had officially entered the woods, I had the strong sensation of being followed. There were shadows slipping in and out of my peripheral vision, and birds and small animals burst out of their hiding places around me for no apparent reason. I tried to outrun the feeling, but it stayed with me.


The moon above me was full, and I raced across a landscape of brightly contrasting moonlight and shadows. I knew I was being followed by something Other, shrouded in the shadows of the trees, and I left the woods and bounded toward the meadow in hopes of losing it. However, the sensation of being followed did not dissipate. Rather, it seemed as if the Other merely took another form and took to the sky. My eyes could not detect it, but I knew it with every ounce of my being, and my fur was crawling up my spine.


I crossed the meadow and entered another part of the woods. My energy was waning, but I was afraid to turn back since I was certain that I was being followed. I began to wonder if the Other following was my father. I also wondered what happened to Ben to prevent him from coming. While I was pondering all of these things and running blindly, another figure stepped directly into my path.


I skidded to an abrupt halt. A shard of moonlight slashed through the trees and cast the figure half in light and half in shadow, and the half in light was definitely not human. His skin was lumpy and blotchy. His face was distorted like a hairless animal with black eyes deeply recessed in pits and a lipless grin that revealed an irregular row of jagged teeth.


I did not bother trying to read his aura.


Slowly and deliberately, the figure brought up his arm, and my fur stood up as I realized that he was holding a gun and about to shoot me. With my heart pounding, I was trying to decide my next move when the shadow that had been following me came barreling over my head. I saw nothing more than a black blur topped by a streak of gold as the Other launched into the other Other. The arm holding the gun was thrust straight up, and the tree limbs exploded as the gun when off. The two figures fell in a tangle, and both were soon swallowed in darkness. I heard a series of growls, but I could see nothing. I decided that right then was a good time to make a hasty exit while they were both distracted.


I raced back across the meadow toward familiar woods, but I must have veered too far left, for I once again found myself in the strange woods where I had been two night ago. Recognizing the trees and the heaviness of the air, I tried to turn right to compensate for my error, but soon I was facing an unfamiliar stream that cut through the woods. I approached the stream, which seemed clean and clear, and was taking a tentative sip when I heard a growl and realized I had company.


I looked up to find myself facing two other wolves. Real wolves. I had no idea we actually had wolves in Mississippi. Their teeth were bared as they inched closer.


This so reminds me of high school, I thought, but the funny thought was of little comfort as they continued to close in on me. I was considering making a break and running when I heard another growl coming up from behind me.


When I turned, I realized that not only was the third wolf baring his teeth at the first two, but he was so much bigger. He stalked past me and put himself between me and the two wolves. As I backed away, he charged across the stream. All three wolves became entangled and rolled in a moment of snapping and growling, but the first two broke away and, quickly determining that they were overpowered, beat a retreat away from the stream.


The large wolf turned toward me, and I was poised to run again when I realized that he was less wolf than they were and more Other. As he walked slowly toward me, he looked at me with eyes that seemed almost human in their expression, as if asking if I was okay.


Thanks. I projected the thought toward him, but he gave no acknowledgment.


For a long moment, we stood contemplating each other. Eventually, I gave up trying to communicate and turned to make my way back to the house. It had been a long and tiring night, and I was already looking forward to the legendary bathtub and maybe even a light midnight snack before crawling back into bed. I realized the Other wolf was following me, although he kept his distance and didn’t seem to pose a threat. I stopped occasionally and turned to regard him, but he stood there, tongue hanging out, reminding me of those persistent guys with every lame pickup line you’ve ever heard—usually freshmen. Just sayin’.


Look, thanks for saving me back there, but I’m just heading home now, okay?


He closed his mouth, and his eyes were wide and quizzical.


I turned back and continued trotting toward home with my new buddy close on my heels. I climbed the porch steps, pawed open the door, and turned back to look at the wolf. I hoped he didn’t expect me to invite him in.


For a moment, he watched me, and then he climbed the steps and walked over to a spot close to the door. He circled and lay down, then looked back at me. I could already imagine Daniel fussing about me bringing home a new pet.


What can I say? I thought to myself. He followed me home. Can we keep it?


Emily Night grew up in a series of small towns in Mississippi. The youngest of four children, she dreamed of being a writer from the moment she wrote her first story in the fourth grade. At the age of twelve, she rode her bike up to the square of a small town and asked the editor to publish one of her stories. While the editor did not, he was very kind and encouraging. She graduated magna cum laude from Mississippi College and later obtained a Master's from Belhaven University. She prefers reading and writing fantasy because fantasy allows her to test the modern-day limits of what is possible.

5 signed copies When In Gnome