Lily Madison thought dying because of a bad manicure was the worst thing that could happen. She was wrong.


Waking up in the hospital and realizing she's being stalked by an entire herd of naughty little ghosts turns her entire world upside down. She begins to doubt her own sanity until she realizes she isn't alone. A Goth girl, named Zoe, can see the ghosts, too.


Most of the ghosts look like fuzzy blobs, but one is not blobby at all. He's a very hot, very annoying dead guy named Nick. Although they dislike each other on sight, Nick soon realizes Lily is his only hope. With the help of Zoe and Mr. Wan, the manicurist who almost killed her, she has only days to get Nick and the other ghosts back where they belong or the whole world will be in terrible danger.


But sending the ghosts back means saying goodbye to Nick forever, and Lily isn't sure she'll ever be able to let him go. 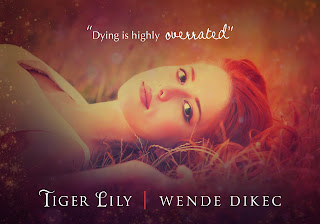 
"First Wende Dikec grabs you with her fresh writing, then she keeps you in the throes of her story with an incredible voice and a gifted talent for spinning tales that will amaze and delight. I am stunned. Tiger Lily will consume you, and before you know it you are fighting for air yet begging for more. You've been warned!"


I died because of a bad manicure. It wasn’t a nasty fungal infection from the manicurist using dirty equipment, or a cut that allowed deadly bacteria to creep under my skin and rot me from the inside out. I died because on impulse I let Mr. Wan of Wan Fine Lady Nail Salon paint my nails a color called Pretty and Pink.


With my red hair and pale skin, pink is tricky, but I trusted Mr. Wan. When he told me, “New color, big discount for you, Lily Madison,” I didn’t realize he actually meant, “Bad color, nobody else wants it.”


I’ve never been a risk taker. My idea of living on the edge was not having an extra bottle of hand sanitizer in my purse. I knew the pink would be a mistake, but I ignored my inner voice. I guess the smell of acetone and the hum of the nail dryers had lulled me into such a relaxed state that I didn’t realize how awful the color actually looked until I drove home in the BMW my parents had given me for my sixteenth birthday.


Pretty and Pink was false advertising, but as I learned long ago in my ninth grade science fair project, neither the government nor the FDA regulates the names of nail polish colors. I didn’t have a case, but I felt extremely upset.


I didn’t see the ice cream truck stopped in the middle of the road. I was staring at my nails, wishing I’d gone with my first choice, Princesses Rule!, a frosty pale pink that would have enhanced my natural skin tone. I glanced up just in time to narrowly avoid hitting the truck and several small children caught in a snow-cone-induced feeding frenzy.


It’s funny how accidents happen in slow motion. I remember the shocked faces of the people on the street as I swerved and flew over a small embankment. Someone screamed, and it took me a full second to realize the high-pitched wail came from my own mouth. I’d started screaming the minute I’d steered away from the ice cream truck, screamed some more as my car became an airborne missile, and continued screaming until it landed in the deep, murky waters of Lake Eugene.


I tried to open my door, but it refused to budge. My windows wouldn’t roll down either. I pressed the buttons anyway, even the one on the dashboard to turn on the radio, but none of them worked except my hazard lights. I didn’t know I had hazard lights, although I’d read all about them in my driver’s ed class. They blinked on and off, illuminating the darkness around me with an eerie, red, pulsating beacon.


I unbuckled my seat belt and searched for something to break a window with, but couldn’t find anything. I swung my purse at it, pounded it with the heel of my shoe, and even tried stabbing it with my nail file. I reached for my phone to call for help, but it was too late.


As the car filled with water and I gasped for air, the last thing I saw was that awful color on my nails as I scratched and clawed at the window until my fingers bled and everything turned black. As I died, I thought about my parents, and my friends, and all the things I would never get to do, and the fact that Mr. Wan had just lost his very best customer due to his own negligence. I hoped he would be sorry. Thinking about how bad he’d feel gave me just a little peace before I slipped away into darkness.


Wende Dikec has spent her life traveling the world, and collecting stories wherever she visited. She writes in several romance genres, and her books are quirky, light, and fun. Fluent in several languages and married to a man from Istanbul, Wende is a trekkie, a book hoarder, master of the Nespresso machine, and mother of three boys. A puppy named Capone is the most recent addition to her family, and she blogs about him as a way of maintaining what little sanity she has left.


Sign up for Wende’s newsletter for a chance to win a $25 Amazon gift card. https://madmimi.com/signups/177092/join