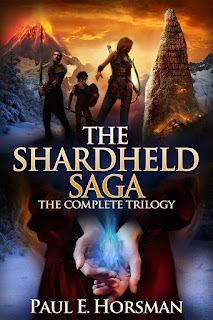 Summary from Goodreads:When the young slave Muus picked up the blue shard, he couldn’t know it would change his life. Becoming the Shardheld finally freed him from his hated serfdom, but it bound him to a goal as awesome as it was dire.

Hunted by false Jarl Rannar’s murderous soldiers, he started on a perilous journey through the snowy forests of the Norden to far away Falrom, the lost Burning Lands, where the mighty Kalmanir stone waited for him and the magic of the shard.

Not only Muus was affected by the shard’s implacable will. His former master Kjelle, youthful heir to a rich mining estate; Birthe, teen widow, wisewoman and mighty huntress; little Hraab with his strange, unworldly wisdom; deposed boy prince Ottil, and many others followed him south.

Afraid for the lives of his friends, Muus escaped all but the girl who loved him, and together the two traveled to fiery Falrom, seeking the Kalmanir before the enemy found them. Should Jarl Rannar gain possession of the shard, it would mean the return of the cruelly insane Gods Before and their world of primordial horror, and Muus was resigned to die to prevent that from happening.

Meanwhile, his friends weren’t prepared to give up, either, and so the race was on. To Falrom! 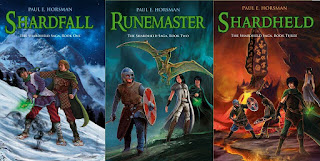 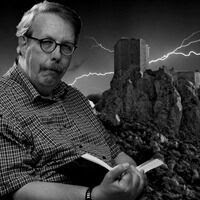 About the Author
Paul E. Horsman (1952) is a Dutch and International Fantasy Author. Born in the sleepy garden village of Bussum, The Netherlands, he now lives in Roosendaal, a town on the Dutch border with Belgium.

He has been a soldier, salesman, scoutmaster and from 1995 teacher of Dutch as a Second Language to refugees from all over the globe.

Since 2012, he is a full-time writer of epic light fantasy adventures for Y.A. and older. His works have been both trade published in The Netherlands, and self-published internationally.