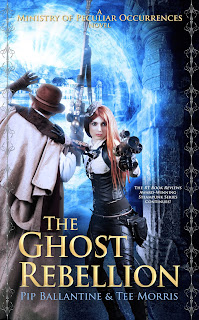 
The Ministry of Peculiar Occurrences


The chase is on! After the destruction of the Diamond Jubilee, Agents Eliza D Braun and Wellington Books are in hot pursuit of Dr Henry Jekyll. While he continues his experiments on the aristocracy of Europe, he leaves a trail of chaos and despair in his wake. However when Eliza and Wellington run him to ground in India, they are forced to come face to face with ghosts from the past, and the realities of empire.


Meanwhile Brandon Hill and Bruce Campbell travel deep into Russia hunting down ingredients to save Queen Victoria's life. Amid the cold they uncover a new threat from the revitalized House of Usher .


All the agents of the Ministry of Peculiar Occurrences will find their allegiances in question, and their mettle tested as a new dastardly era of international intrigue dawns.


Chapter One: Wherein a Delightful Luncheon Is Cut Short


Wellington Thornhill Books took in a deep breath, sparing just a moment to collect his wits. Otherwise he risked not living to see dessert.


The archivist-turned-agent dabbed at the corner of his mouth with his snow-white napkin, and draped it carefully over his lap. Outside the window the gleaming Atlantic rolled under their ocean liner the African Sunset, but that was not the view that held his attention. His focus remained with the dandy in front of him. Since their first meeting, the bombastic Lord seemed rather taken with the sound of his own voice, which was why the change in his dining companion's demeanour came as such a shock.


If an attack should come Wellington still had his dinner knife and fork. He was also in possession of a glass of wine, half finished—a pity to use, since it was a delightful vintage and paired perfectly with the duck—that could blind his opponent for a few valuable moments.


His lunch date kept a hard glare fixed on him, the monocle digging into the folds of his cheek. Rather unexpected to Wellington, Lord Hieronymus Featherstone had run out of things to say, and was now giving him his undivided attention.


Wellington thought he had shown unending fortitude while being subjected to Featherstone's eternal droning on about his recent excursions across Africa, India, and Siam. He now knew to what far reaches Lord Featherstone had traversed in the name of Her Majesty—which might be useful.


Yet now Featherstone sat before him, no longer the awful, droning chatterbox. The gentleman's jaw twitched as he kept his ice-chip blue eyes trained on Wellington, demanding satisfaction.


"Well," the lord spoke, his voice booming from his barrel chest, "answer me, man."


Sod it, Wellington thought as he picked up his glass. At the very least, I will finish this excellent wine.


"You obviously mentioned her name during one of your riveting stories when crossing the Serengeti," Wellington replied, taking in a good, long sip of his wine.


"My dear Bernice does not care for heat."


"Then perhaps you mentioned her joining you as you crossed the Canadian Rockies?"


"Nor does she care for the cold."


Mrs. Bernice Featherstone did not sound either lovely or agreeable, a perfect match for her husband, it seemed.


Nodding in resignation, Wellington cast another quick glance across the table, taking note of the knife and fork. Both hardly suited for close-quarter combat, but still useful. "M'lord, we could speculate for the entirety of the afternoon on how I came to know your lovely wife's name, but why don't we just cut this clever banter short and try a more direct form of engagement."


"The truth." With a final dab at of the corners of his mouth, Wellington dropped the napkin on the table, swiping up the fork and placing it in his lap. He positioned the silverware for a quick thrust as he began. "Lord Featherstone, it is no lie when I say your company has been enlightening. I have genuinely enjoyed our spirited and scintillating discussions whilst we journey around the Ivory Coast. However, to say we 'met you' by chance would be disingenuous." His grip tightened on the fork as he said, "My associate and I have been tracking you since your boarding in Conakry."


Born in Wellington, New Zealand, Philippa has always had her head in a book. For this she blames her father who thought Lord of the Rings was suitable bedtime reading for an eight year old. At the age of thirteen she began writing fantasy stories for herself.


She first earned a Bachelor of Arts in English Literature and Political Science and then a Bachelor of Applied Science in Library and Information Science. So soon enough she found herself working in the magical world of libraries where she stayed for over a decade.


Her first professional sale was in 1997, and since then she has gone on to produce mostly novel length fiction. In 2006 she became New Zealand’s first podcast novelist, and she has voiced and produced Weaver’s Web, Chasing the Bard, Weather Child and Digital Magic as podiobooks. Her podcasts have been short listed for the Parsec Awards, and won a Sir Julius Vogel award.


Philippa is the author of the Books of the Order series with Ace- Geist and Spectyr and Wrayth out now, and Harbinger to follow. She is also the co-author of the Ministry of Peculiar Occurrences series with Tee Morris. Phoenix Rising debuted in May 2011 and The Janus Affair came out in May 2012. She also has the Shifted World series with Pyr Books, with the first book Hunter and Fox out now.


When not writing or podcasting, Philippa loves reading, gardening, and whenever possible traveling. With her husband, Tee and her daughter, she is looked after by a mighty clowder of three cats.


Tee Morris began his writing career with his 2002 historical epic fantasy, MOREVI The Chronicles of Rafe & Askana. In 2005 Tee took MOREVI into the then-unknown podosphere, making his novel the first book podcast in its entirety. That experience led to the founding of Podiobooks.com and collaborating with Evo Terra and Chuck Tomasi on Podcasting for Dummies and its follow-up, Expert Podcasting Practices for Dummies. He won acclaim and accolades for his cross-genre fantasy-detective Billibub Baddings Mysteries, the podcast of The Case of the Singing Sword winning him the 2008 Parsec Award for Best Audio Drama. Along with those titles, Tee has written articles and short stories for BenBella Books’s Farscape Forever: Sex, Drugs, and Killer Muppets, the podcast anthology VOICES: New Media Fiction, BenBella Books’ So Say We All: Collected Thoughts and Opinions of Battlestar Galactica, and Dragon Moon Press’ Podthology: The Pod Complex.


Tee brought all these skills to the award-winning Ministry of Peculiar Occurrences series which he wrote with his wife, Pip Ballantine. When he is not writing, Tee enjoys life in Virginia alongside Philippa Ballantine, his daughter, and three cats.


Embed code for puzzle cover reveal
Posted by 3 Partners in Shopping at 12:05 AM