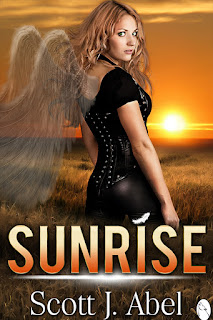 When the shadows come and your world goes dark, can you hang on until sunrise...or will you give in to the darkness? After a tragic shooting shatters Parker's world, the darkness comes for him. His guardian angel Marie fights to save his soul, but will her love be enough to save him? Eighteen-year old Parker, big brother, and high school quarterback, dreams of glory on the football field. But on the night of the shooting, his entire world shatters. In a chilling span of sixty seconds, a mass tragedy wreaks havoc upon his life, family, and community. Although hailed a hero, Parker is horror-struck to discover an incident from his past was the motive for the killings and that he was the intended target. When someone threatens to get the one that got away, Parker finds himself hunted. Help comes from an unexpected source - an angel named Marie. A spunky, impulsive guardian, Marie is dedicated to saving Parker at all costs. When confronted by a sinister nemesis who covets Parker's soul, a desperate struggle is waged over Parker's fate. With time running out, Marie must face her growing, but secret affections for Parker that she can no longer ignore. Affections that will force her to make the ultimate decision-sacrifice herself and all that she believes, or lose Parker to the darkness forever.

She’d just told him the most amazing tale, and now she wanted him to leave her to face danger alone…

A shadowy figure sat on the table. A small flame appeared in the darkness as the silhouetted intruder lit a cigarette. “That’s it. I’m getting you out of here,” Marie said. She grabbed Parker by the arm and led him away from the picnic table.

Marie blasted another jolt of blue light into the woman, who collapsed to the ground, jets of white smoke swirling across her limp body.

A voice called out from behind them. “You have nowhere to run, outsider.” Its tone was cold and mocking. Parker turned to look, but Marie nudged him forward. “Get in the car,” she barked. This was not a request.

Why couldn’t she just come with him? She didn’t have to stay and fight. They could make their escape together. He was about to ask her to get into the car when Seth loomed behind her. “He’s behind you!”

Marie whirled around. Seth took a long drag on his cigarette, the orange ember intensifying in the darkness. The small fire pulled away from his pale face, and he exhaled. “Stop this foolishness, Marie. You can take your charge and run to the four corners of the earth, and I’ll still be there, waiting.”

About the Author
Scott works in state government and is the author of several short stories and the young adult paranormal romance novel, Sunrise.

In addition to his writing endeavors, Scott is also a public speaker. He often speaks to organizations, non-profits, and churches on leadership, communication, teamwork, and motivational messages.

Scott has a bachelor’s degree and a law degree from Texas Wesleyan University, but is a rabid, life-long fan of the TCU Horned Frogs. He lives in the suburbs of Austin with his wife and two precocious daughters - who enthusiastically assist him in his search for the perfect combination of chocolate and peanut butter.

a Rafflecopter giveaway
Posted by 3 Partners in Shopping at 10:03 PM