Hannah Clark used to be an ordinary girl. She used to be a lot of things. Until she was bitten.


Five months ago, Hannah woke up in the middle of the woods as a vampire. She didn’t know how it happened or who turned her. She just knew she wasn’t safe in her hometown anymore.


Fort Wayne was supposed to be her fresh start. Her chance to finish high school without any other incidents. But then she met Jackson. Their attraction was instant and awakened something deep inside of her. Her thirst for blood.


Things only got worse when her maker, Lucas, came to town. He might have been sexy, but he was one dangerous vampire. And if Hannah wanted to keep Jackson safe, she had to protect him from Lucas’ ravenous ways. Even though she found herself excited by them.


But Lucas wasn’t there for her. Something sinister was happening in town. Vampires were going missing, and if Hannah didn’t want to be next, she had to work with Lucas to solve the mystery. But could she trust him? Or should she trust Jackson? She had to make a choice—and her life might just depend on it. 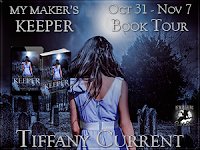 I ran through the woods. My heart was beating so hard I thought it would explode out of my chest. I didn’t stop, though. I couldn’t. If I did, he’d catch me. And I wasn’t sure what he’d do to me this time. He’d already… I didn’t want to think about it. I had to keep moving.
There was a fork in the road up ahead. Which way should I go? My gut screamed left, so I went in that direction. I prayed I’d made the right decision. That this trail would lead me back to my car. If it did, I could get out of here. I’d escape him.
But what if I couldn’t?
That one sliver of doubt crippled me. Fear took over. Tears sprang to my eyes. My lungs tightened, and suddenly, it was as if I couldn’t breathe. I clutched at my throat, gasping for air that wouldn’t come. I needed to focus on something, anything, to calm myself down.
Immediately, my eyes went back to the waterfall. I zeroed in on the sound of the water pouring into the pond below. “Relax, Hannah. You need to relax,” I said to myself. “Just for five minutes, until you get out of here. Do it for Mom’s sake.” I wiped the tears off my face and counted backward from ten. When I reached the number one, my heartbeat was almost back to normal.
I took in my surroundings. It was dark and quiet. Too quiet. Even the birds had called it a night. As if they knew something I didn’t. That was when I felt it. The chill that had crept up my spine.
He was near.
I took off running. All the while, I cursed at myself. I was so stupid. To come here after hours. To hike up to that waterfall. What was I trying to prove? Something moved above my head. On instinct, I looked up and tripped over the rock in front of me. I took a nose dive to the ground, my ankle snapping on impact.
A surge of pain ripped through me. At first, it was just in my ankle. Then it shot up to my knees and into my thighs. But it didn’t stop there. It kept moving upward as if it had some sort of purpose. This was more than a break. Something else was going on. It felt like motor oil was creeping through my veins. Moving from my stomach to my chest and filling every part of my brain. I howled in agony.
A dark shadow jumped down right beside me. It was him. I jerked away, my body tensing. “Please,” I begged.
He moved toward me, his eyes finally coming into view. They were dark, impossibly so. And his mouth was covered in…blood. Mine? As he reached for me, I flinched. He snarled in response, finally showing the thing I was truly afraid of.
His fangs.
I screamed in horror just as everything went black.


Tiffany Current earned her Bachelor's degree in dramatic writing from Drexel University. Her first book, the self-help relationship guide How to Move in with Your Boyfriend (and Not Break Up with Him), was published by Turner Publishing.

3 copies of My Maker’s Keeper