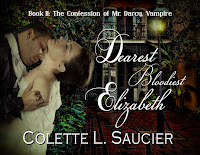 
The Confession of Mr. Darcy, Vampire


The Confession of Mr. Darcy, Vampire


His story continues in Dearest Bloodiest Elizabeth, the lurid, lusty sequel to Pulse and Prejudice, as death shadows the newlywed Darcys from Pemberley to the parlors of Regency London to the courtyards of Antebellum New Orleans. As Elizabeth discovers the trials and travails of marriage to a vampire, can Darcy ever believe that she loves him as he is? Or will his jealousy tear them apart? 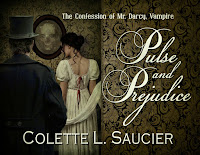 On Sale Throughout October for $2.99


Colette Saucier began writing poems, short stories, and novellas in grade school. Her interest in literature led her to marry her college English professor, but eventually a love of history encouraged her to trade up to a British historian.


Technical writing dominated her career for twenty years, but finding little room for creativity in that genre, she is now a full-time author of fiction.


Pulse and Prejudice was named “A Most Inventive Adaptation” by Elle Magazine (April, 2016). It was the 1st Place Winner in its category in the 2013 Chatelaine Awards Romantic Fiction Contest and is listed in Chanticleer’s 2013 Best Book Listing. Colette dedicated 15 months traveling to Europe and Britain, researching Regency England and vampire lore and literature, to complete for historical accuracy. It remains faithful to nineteenth century literary conventions and Jane Austen’s narrative to create a compelling, thrilling paranormal adaptation.


Colette was selected a “2013 Amazon Breakthrough Novel Award” Semi-finalist and named “Debut Author of the Year” by Austenprose for All My Tomorrows—now expanded and republished as The Proud and the Prejudiced—which was also chosen Austenesque Reviews “Favorite Modern Adaptation” 2013.


Colette’s latest novel—Book II: The Confession of Mr. Darcy, Vampire—entitled Dearest Bloodiest Elizabeth, follows the newlywed Vampire Darcy and his bride Elizabeth from Britain to Antebellum New Orleans. Due to her devotion to historical accuracy, she spent two years researching Creole Society and Nouvelle Orleans in the years following the War of 1812.


A bestselling and award-winning author under multiple pseudonyms, she is currently working on multiple projects including a parody of Wuthering Heights and a children’s book based on the inspiration for the dog Amadeus from Pulse and Prejudice and Dearest Bloodiest Elizabeth.


Colette lives in a lakeside community in South Louisiana with her historian husband and their two dogs.