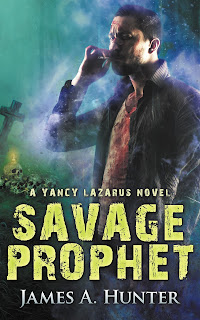 Yeah, ’cause that’s exactly what Yancy Lazarus needs in his life: more complications. As if being the Hand of Fate and the newly appointed guardian over one of the Horsemen of the Apocalypse wasn’t headache enough.

All Yancy wants is an easy life on the open road—chock-full of ribs, beer, cigarettes, and smoky bars blaring with gritty blues music—but that just isn’t in the cards. Nope, not anymore. He’s been charged to save the world and now that he’s got a no-shit demon riding shotgun in his head, he’s sorta committed to the cause.

If Yancy can’t sort through this colossal heap of bullshit, he’s coffin bound. But, he’s not dead yet. In fact, he even has a lead.

Turns out one of the Horsemen of the Apocalypse—the pale Rider, Death—is slumming around in one of Yancy’s old haunts. In order to corner this new threat, though, Yancy’s gonna have to face some deadly supernatural nightmares from his distant past. And, to make matters worse, he’s not the only one trailing the Pale Rider. A powerful new mage with some serious magical chops, is also aiming to find the Fourth Seal and he’ll do whatever it takes to win. Even if it means hurting those closest to Yancy … Like F.B.I. Agent Nicole Ferraro.
Amazon

“Will anyone stand for this man? Stand for Yancy Lazarus?” The voice rang out, echoing off the bleak stone walls, rolling over me like a frigid ocean wave crashing on a rocky shoreline. “Will anyone dare to call him friend”—a taut pause—“or brother?” A creeping dread filled my belly, twisting my guts into serpentine knots. Gooseflesh broke out along my arms, neck, and back, while slick beads of perspiration dotted my forehead.
If no one stood for me, vouched for me, I was dead. And I’m not being hyperbolic or metaphorical here.
Someone—probably ol’ Iron Stan, the leader of the Fist of the Staff and my former boss—would literally slip a Vis-imbued garrote around my neck and strangle me until I was a lifeless meat sock. Choke the air from my lungs while crushing my windpipe, leaving me to die a very undignified death: Kneeling on the concrete floor before a bunch of bathrobe wearing geezers. Back bent with some douchehole digging an elbow in between my shoulder blades. Hands cuffed behind my back and a brown leather sack covering my bowed head.
Well, someone would try …
These days, I had some extra kick under the hood in the form of an honest to goodness End Times Seal—straight outta the book of Revelation—come to me by way of an Elder Bigfoot, Chief Chankoowashtay, the leader of the People of the Forest and the last great ruler of the Chiye-tanka.
Yep, riding right next to my ticker was the Seal of War. A metaphysical prison containing the essence of the second horseman of the Apocalypse: Azazel the Purros, Grigori of Old, Scourge of Mankind, Maker of War, and Lord of Dark Magicks. A creature with a truly intimidating string of titles, though, admittedly, I’d hate to be him when tax season rolls around and you have to list your full name in quintuplet.
True, I couldn’t take on the entire Guild even with that evil dickhead, Azazel, in my corner, but I’d sure as shit go down hookin’ and jabbin’, and I’d take at least a few of these sons of bitches with me if it came to it.
“He abandoned this Guild,” the voice said, as insistent and unyielding as old stones. I swiveled my head toward the speaker, and though I couldn’t see her—what with a friggin’ sack over my face—I could picture her in my mind. A striking woman with smooth skin, high cheeks, and bright green eyes, searching and weighing. Her hair, a mass of silver, hanging all the way down her back. Arch-Mage Borgstorm, head of the Guild of the Staff. As savvy as magi came, but cold, calculating, and political to her teeth.
“Throughout the course of this trial,” she continued, “the prosecutor has shown Mage Lazarus to be a traitor. A danger. A deserter.” Her words sparked a fire in my chest, my blood rising to a low simmer as I clenched my teeth and balled my hands into fists.
Traitor.
I’d given more for the damn Guild than anyone had a right to ask, and they’d been the ones to turn their backs on me and mine, not the other way around. But, despite the fact that I had the sudden urge to conjure a gout of molten rock and melt the chamber to blackened slag, I held my tongue.
My personal feelings aside, I needed these shifty bastards in my corner because I had nowhere else to turn. No other leads to run down.
After trying unsuccessfully to find James and the Morrigan for the past two months—and with no further word from Lady Luck, my immediate boss as Hand of Fate—I only had one viable clue: the Fourth Seal. The essence of Death and Pestilence. And, unfortunately, the only person who knew the location of the Seal Bearer was sitting on the raised platform. The arch-mage. Awful luck for me, considering she was the one leading the charge to have me summarily executed and thrown into an unmarked grave.
Them’s the breaks sometimes, I suppose.
“Even if Mr. Lazarus isn’t willfully an enemy of the Guild,” the arch-mage said, “no one here can deny he is a liability and threat to anyone who comes near him. Everyone in this room has seen his personnel file, so we all know exactly how dangerous he is. Moreover, since deserting our ranks in ’98, he’s committed hundreds of unsanctioned acts of violence and vigilantism across Inworld and Out.
“Hundreds. Violating untold treaties. Wantonly killing. Compromising the integrity of this distinguished organization.” She made that last one sound far worse than wantonly killing, which should tell you everything you need to know about her. “So, I ask again. Will anyone stand for him knowing the potential risk he represents?”
A long, uncomfortable pause filled the room, a palpable weight settling over everything.
“If you would have him back among our number,” the arch-mage said at last, breaking the quiet, “stand now, or hold your peace as the Elders pass judgement on this man. This unrepentant criminal.” 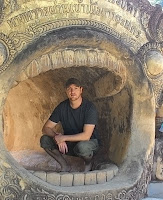 Okay … the last one is only in my imagination.

Currently, I’m a stay at home Dad—taking care of my two kids—while also writing full time, making up absurd stories that I hope people will continue to buy. When I’m not working, writing, or spending time with family, I occasionally eat and sleep.

You can visit me to find out more at www.JamesAHunter.wordpress.com 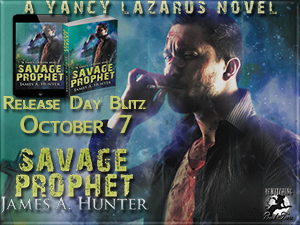