Jubal Van Zandt and the Revenge of the Bloodslinger 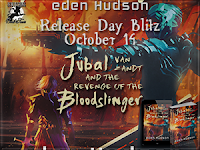 
Narcissist, sociopath, and shameless backstabber Jubal Van Zandt is the best damn thief in the history of the Revived Earth...and he won't shut up about it.

But not everybody in the swampy, soggy, feudal future approves of Jubal's vocation. The Guild—the religious fanatics who helped rebuild civilization after the collapse—in particular are waiting for their opportunity to slip the noose around his neck.

Which is why when the renowned Guild knight Carina Xiao—a.k.a. the Bloodslinger—contacts Jubal about an off-the-books job that violates Guild Law, he's too intrigued to say no. He is the best damn thief in the history of the Revived Earth, after all.

Part bizarro ecopunk, part outworld thriller, part odd-couple roadtrip, Jubal Van Zandt and the Revenge of the Bloodslinger is a 150% futurepunk quest for blood and betrayal across the Revived Earth.


I am invincible. I am a mutant. I have 3 hearts and was born with no eyes. I had eyes implanted later. I didn't have hands, either, just stumps. When my eyes were implanted they asked if I would like hands as well and I said, "Yes, I'll take those," and pointed with my stump. But sometimes I'm a hellbender peeking out from under a rock. When it rains, I live in a music box.


But I'm also a tattoo-addict, coffee-junkie, drummer, and aspiring skateboarder. Jesus actually is my homeboy.