I love this series and going back to the Jazz era and Prohibition.
~Community Bookstop 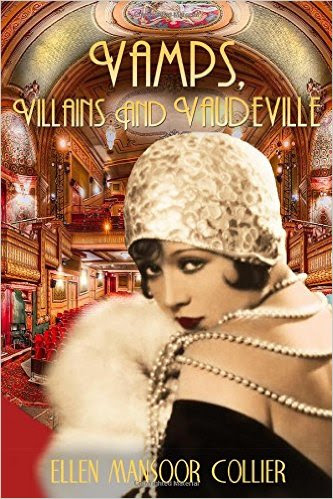 In 1920s Galveston, society reporter Jazz Cross is in for a surprise when she attends a traveling vaudeville show with her beau, Prohibition Agent James Burton, and discovers that an old flame acts in the production. That night, they find a stabbing victim behind the Oasis — her half-brother Sammy’s speakeasy — who’s identified as an actor in the troupe. When the victim disappears and later turns up dead, Jazz must help prove that Sammy wasn’t the killer.
Meanwhile, a ring of jewel thieves is turning up all over town, robbing rich tourists of their precious gems. After a second vaudeville actor is found dead, Jazz discovers that the events behind the scenes are much more interesting than the outdated acts onstage.
To make matters worse, Sammy’s old nemesis demands that he settles a score and forces him into yet another illegal scheme. Can Jazz help solve the murders and prove her brother’s innocence—so he can escape the Downtown Gang for good?
A historical Jazz Age mystery inspired by real-life Galveston gangs and local landmarks.


During dinner, Agent Burton and I made small talk, careful not to bring up the bloody knife or missing man or even my old flame Derek in case of eavesdroppers.
I literally had to bite my lips and tongue to keep from blurting out nosy, none-of-my-business questions. Still, it seemed forced, when all I wanted to do was ask about his ex:  What was she like? Was she pretty? Why did you really call it quits?
Finally when I couldn’t stand it, I asked, “Why did you move to Galveston—because of your break-up?”
He nodded. “Partly. I needed to get out of upstate New York. I felt suffocated, stagnant, living and working in the same town where I grew up.”
“Why Galveston, so far away? I imagine it’s very different than what you’re used to.”
“That’s exactly why I accepted this assignment. I thought an island atmosphere might seem more like a tropical vacation.” He grinned. “Lucky for me, I got to meet you, and enjoy the company of a beautiful woman.”
What a line! “Boy, you’re a smooth talker.” I batted my lashes. “Keep it up, handsome.”
Without warning, a menacing man knocked into our table and stood there, daring Burton to fight. The table wobbled and I reached out to steady the candles, worried the tablecloth might catch on fire. I looked up to see a thug glaring at Burton, a smirk on his strong features. The waiter arrived with our dinners, took one look and scurried away to the kitchen.
The restaurant buzz died down to a whisper while the diners waited for Burton’s reaction. Slowly he removed his napkin and stood up, facing the bully, not afraid to back down.
“Excuse me, but I believe you bumped our table,” Burton said evenly, working his jaw. “If you have anything to say to me, we can go outside. Now.”
The goon patted his tailored jacket pocket, indicating a gun. He moved inches away from Burton, chest puffed out like a rooster. “I’ll say it to your face, Fed. Johnny Jack has a message for you and your pal, Sammy: Keep off the Downtown Gang’s turf—or else.”
My stomach knotted. How did this thug know Burton and my brother Sammy were friends?
“Oh yeah?” Burton leaned in, blue eyes narrowed. “Is that a threat?”
“I’d call it a warning.” The hood glared at Burton, his eyes dark as coals. “You’ll know when it’s a threat.”

Ellen Mansoor Collier is a Houston-based freelance magazine writer and editor whose articles and essays have been published in a variety of national magazines. Several of her short stories have appeared in Woman’s World. During college summers, she worked as a reporter for a Houston community newspaper and as a cocktail waitress, both jobs providing background experience for her Jazz Age mysteries.
A flapper at heart, she’s worked as a magazine editor/writer, and in advertising and public relations (plus endured a hectic semester as a substitute teacher). She graduated from the University of Texas at Austin with a degree in Magazine Journalism and served on UTmost, the college magazine and as president of WICI (Women in Communications).
FLAPPERS, FLASKS AND FOUL PLAY

is her first novel, published in 2012, followed by the sequel, BATHING BEAUTIES, BOOZE AND BULLETS

, released in May 2013. She lives in Houston with her husband and Chow mutts, and visits Galveston whenever possible.
“When you grow up in Houston, Galveston becomes like a second home. I had no idea this sleepy beach town had such a wild and colorful past until I began doing research, and became fascinated by the legends and stories of the 1920s. Finally I had to stop researching and start writing, trying to imagine a flapper’s life in Galveston during Prohibition.”
Author Links:
Website: http://www.flapperfinds.com/
GoodReads: https://www.goodreads.com/author/show/6452242.Ellen_Mansoor_Collier
Pinterest – https://www.pinterest.com/artdecodame/flappers/
Purchase Links:
Amazon

Click on the book covers to order from Amazon.  B&N