As a mob enforcer, Jake Caldwell is in the dark business of breaking kneecaps and snapping bones. But each job sends him one step closer to turning into the man he swore he’d never become—his violent and abusive father. Leaving the mob is easier said than done. When his boss offers a bloody way out, Jake has no choice but to take it, even if it means confronting ghosts of old.


Arriving in his Lake of the Ozarks hometown, Jake has two things on his mind: kill ruthless drug lord Shane Langston and bury his dying father. What he doesn’t expect is to fall in love all over again and team up with his best friend Bear, the Sheriff of Benton County, to take Langston down. Racing through the countryside searching for Langston, the web of murder, meth and kidnapping widens, all pointing toward a past Jake can’t escape and a place he never wanted to return—Poor Boy Road.


“Open the door, Carlos,” Jake said, pounding the door twice. No answer, but the shadow wavered as if its owner was uncertain if it should stay or run.


Jake sighed and stepped back. With his good leg, he exploded forward, driving his heel above the knob. The lock assembly collapsed against the splintered wood and the door burst open. Carlos cried out as the door cracked his face, his wiry frame collapsing to the floor. He landed on his ass, holding his nose. Blood poured through his fingers and onto his stained, white T-shirt. Jake entered the apartment to the stench of cigarettes and fried onions, and shut the remains of the door behind him. Carlos pushed back toward a kitchen stacked with crusted plates and glasses, his wide eyes fearful.


Jake tucked the Glock in his waistband and picked up a dented baseball bat leaning against a bookcase covered with dead plants. He held it with both hands, testing the weight. Thirty-two ounce aluminum fat barrel. He walked to Carlos and tapped him hard on the leg with it.


“Where’s your daughter?” Jake asked. The last thing he wanted was a little girl to run in screaming. It happened before.


“Sorry to hear it,” Jake said. He didn’t wish that kind of heartache on anyone, but Keats wasn’t paying him as a shoulder to cry on. “The two grand. Where is it?”


“Ain’t got it. No insurance and the damn hospital’s sucking me dry.”


The bat burned in Jake’s hands. He didn’t want to, but his orders were to liberally apply a blunt object to Carlos’ legs if he didn’t have the money. There would be hell to pay otherwise. He raised the bat, white knuckling the handle.


The brief howl of air and hollow thunk of metal meeting bone echoed in his head, a ghostly sound from long ago. The excruciating pain would rip through the man’s body, so intense he would shred his vocal cords from the screams. He knew because he dealt this punishment too many times in the past. He could feel it because he was once on the receiving end. As the bat barrel wavered and Carlos sobbed, Jake’s cell phone vibrated for the fifth time in twenty minutes. Like the previous four times, he silenced it.


He glimpsed a picture on the kitchen counter of Carlos and his daughter. Eight years old, cute as hell in a white dress with a daisy in her thick, black hair. What would happen to her if Jake broke her daddy’s legs? What would Keats do to him if he didn’t? His cell vibrated again.


Jake tossed the bat on the floor. It clanked toward the busted front door and he yanked the cell from his pocket, checking the number. 660 area code. Home, if there was such a place. He needed to think and the call provided as good a distraction as any. Jake answered with his left hand and pulled the gun out with his right, training it on Carlos.


“Dad’s dying,” Janey said. His sister’s first words to him in a year. Like he was supposed to give a shit. 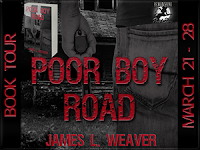 James L Weaver is the author of the forthcoming Jake Caldwell thrillers Poor Boy Road and Ares Road from Lakewater Press. He makes his home in Olathe, Kansas with his wife of 18 years and two children. His previous publishing credits include a six part story called "The Nuts" and his 5-star rated debut novel Jack & Diane which is available on Amazon.com. Author note: a handful of the raters are actually not related to him.

His limited free time is spent writing into the wee hours of the morning, playing parental taxi cab to his kids' sporting endeavors, and binge watching Netflix.
You can read his blog at weaverwrites.wordpress.com and follow him on Twitter @WildcatJim2112.