Diary of a Rocker's Kid by Haley Despard Blog Tour, Playlist and Giveaway

Madison Daley’s father has concealed the truth from her for seventeen years…
Raised on a Kentucky farm, Madison is stunned when a conversational slip reveals her father Michael is a famous ’90s rock star known as the Grim Weeper. Michael left the spotlight and his mansion behind when Madison was dropped off on his doorstep by a woman in a black mask. A dark past is revealed, and the only thing Madison isn’t allowed to know is her mother’s name.
The answers Madison needs can only be found in Beverly Hills…
Though she does hope to persuade her dad to return to the stage, Madison’s real mission is to discover the identity of her mother.
But she is slightly distracted—literally—by the boy next door. Giovanni Abate’s father is an action film star, his stepdad is a major designer, and Gio has his own claim to fame. Madison catches the handsome, young Italian actor’s eye, and their mutual attraction makes for a hotter summer than she ever could have imagined.
Madison hasn’t set foot in California since infancy, but a lot of people are certain she has…
After Madison has a makeover, people are sure they’ve seen her somewhere before, and she is extremely curious about the identity of her supposed doppelganger. As she looks into this strange situation, she’s unaware that Gio is hiding a potentially devastating secret.
Could finding the answers she seeks change Madison’s life forever?
Or will it just lead to more questions to fill the…
Diary of a Rocker’s Kid
“What if who you’ve always been
isn’t who you truly are…” 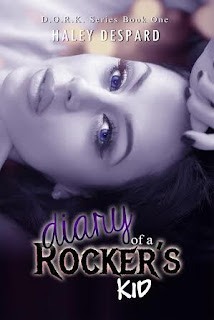 
Diary of a Rocker’s Kid #1 Playlist


Fire and Ice – Within Temptation


Welcome to the Family – Avenged Sevenfold 
Haley Despard was born and raised in small, yet ever-expanding Simpsonville, South Carolina. She discovered a love of writing at age fourteen and hasn't been able to turn off the motor fingers since then. Today she lives just a stone's throw over in the country side of Greer, SC with her husband, son, and Boston Terrier. Her hobbies include amateur photography, designing teaser graphics for her novels, and composing piano music.
Haley's current project is a YA Contemporary Fiction series, but she also loves writing fantasy, romance, and occasionally horror fiction. Defying standards and norms and thinking outside the box is Haley's strong suit, and she plans to write something that makes it big someday. Until then, she's content with her growing author family and a head full of ideas.
Connect with her at the links below and don't hesitate to contact her at hdespardauthor@outlook.com. Haley loves interacting with readers and other authors.


YA Bound Book Tours
Posted by 3 Partners in Shopping at 12:08 AM