Lions in the Garden by Chelsea Luna Blog Tour and Giveaway

Ludmila Novakova--Mila--has barely set foot outside Prague Castle in her seventeen years. But with the choice between braving the bandits and wolves of Bohemia's uneasy roads or being married off to a disgusting old baron, she's taken what she can carry and fled.

Escape won't be easy. Even Mila has heard the rumors of a rebellion coming against the court. The peasants are hungry. The king hasn't been seen in months. Mila's father, the High Chancellor, is well known and well hated.

But Mila can't sit behind a stone wall and let fear force her into a life of silk gowns and certain misery. Her mother's death has taught her that much. She has one ally: Marc, the son of the blacksmith. A commoner, a Protestant--and perhaps a traitor, too. But the farther she gets from the castle, the more lies she uncovers, unraveling everything she thought she knew. And the harder it is to tell friend from enemy--and wrong from right . . . 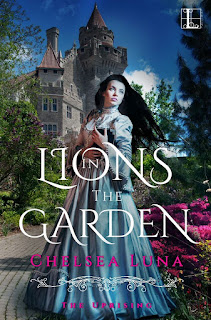 I helped Marc sneak out of the castle as the sky turned pink with the morning sunrise.  He lithely climbed over the towering fence.  When he landed on the other side, he reached for my hand through the bars and kissed it.  “I’ll see you at the ball, Mila.”


“Goodnight, Marc.”  Our secret encounter sent butterflies though my stomach, but as I watched him through the bars, I couldn’t help but think he looked like he was in a prison cell.

Chelsea received a Juris Doctorate from New York Law School in New York, New York in 2007, and a B.A. in Sociology, with a concentration in Criminal Justice, from the University of Tennessee in 2004. She lives in Tennessee.