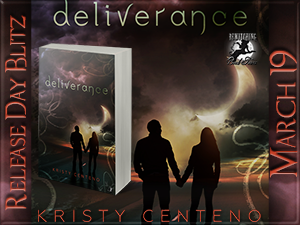 
He’s been locked away his entire life.


He dreams of freedom.


The only way he can accomplish his goals is by breaking free of the chains tying him to a dark past and gloomy existence. But there’s one catch. He’s not human.


And he’s never set foot outside his jail.


Devoted to saving his peers as well as his own life, he sets out to find the one person that can help him achieve his objectives. He knows where she will be and what she will look like, but what he doesn’t anticipate is the fact he finds himself caring for the girl whose life he’s put at risk, more and more each day.


He has only known hatred and violence before her.


However, she will teach him to have faith in humanity, even if she can’t trust him.


Together they will embark on a journey to bring down a corrupt system responsible for the loss of many innocent lives. But when he finds his feelings compromised, can he still move on knowing that doing so will put an end to the life she once knew? How far is he willing to go to be free?


The guards run from room to room in an attempt to place the breach in security. They use their radios to contact every floor and ask where the break has occurred. They receive a reply within moments, confirming nothing is amiss. They will not find a breach because there is none. It was set off as a means of distraction. Samuel approaches and lands a hand on my right shoulder. He calls to me, but I ignore him. He pulls on my shoulder. I resist.


I open my eyes, turn slightly to my right, and slam my elbow into his face. Samuel falls on his knees, clutching his bleeding nose. I bolt. Using what little strength my body has managed to retain, I run toward the glass window at the end of the hall. The pain is all but forgotten as adrenaline kicks in.


Bullets whizz past me, hitting the walls, light fixtures, doors, and the tiled floor. Most fly over my head. One grazes my left arm, but I use the momentum I’ve gained to propel my body onward.


Gerard yells to the men to stop me, but it’s too late. I pick up speed, pushing my injured body beyond its current capabilities. My target is in sight. I lock my keen eyesight on the window, and crash into it a few heartbeats later. The glass panel breaks apart instantly. I freefall for about a second before maneuvering my body so I’ll land on my feet. Shards of glass accompany me on my way down.


Kristy Centeno is the author of the Secrets of the Moon saga and Keeper Witches series.


She has always had a passion for books and after years of being an avid reader, she decided to transform her desire to write into a reality and thus, her first novel was born. When she’s not busy taking care of her five children or holding down the fort, she finds time to sit and do what she loves the most: writing.