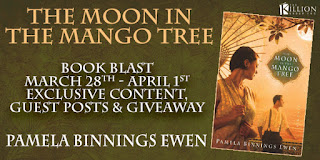 The Moon in the Mango Tree

THE MOON IN THE MANGO TREE is an emotional and riveting tale based on the true life of Pamela Binnings Ewen’s own grandmother. Under the glittering lights of the palace in Siam, can a woman choose between the freedom she craves and the husband she loves with her whole heart? Can she have it all--or does she have to choose? And when you choose between two things you love, must one be forever lost? If you were enchanted by The Moonlit Garden by Corina Bowmann, you’ll be caught in the spell of The Moon in the Mango Tree. 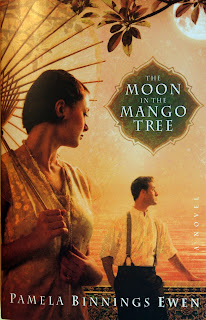 Synopsis:
The dazzling decade, the 1920's, and a beautiful young singer is torn between her fierce desire for independence--to create something of her own to give meaning and purpose to her life--and a deep abiding love for her husband, a medical missionary who will become royal physician to the court of Siam. Based on a true story, one young woman will travel from Philadelphia of the Roaring Twenties to the jungles of the Orient, to pre-war Paris and Rome, in the struggle to find her place in the world.

Available Here: Amazon
Excerpt
I sat naked before a tarnished old mirror in the middle of the jungle and contemplated the situation, letting my anger cool. Sunshine streamed through a window on the right, lighting my hair to a copper haze, burnishing my skin. Still damp from the bath, I patted beads of water on my neck and shoulders with a towel, trying to ignore the question that had begun to gnaw at my thoughts: Have I made a terrible mistake? I turned my eyes to the window. Across a clearing and past the little mission church, a ragged line of tall twisted trees encroached. Dark shapes seemed to dance in slender bamboo that advanced before the forest, undermining the discipline of the mission, but I knew it was just the undergrowth that made those shapes--fern, creeping vines, and waxy dark-green banana leaves.


Join Pamela Binnings Ewen and the Killion Group as we celebrate the release of The Moon in the Mango Tree with this 16 stop Book Blast from March 28th to April 1st. Included in this book blast is exclusive content, guest posts from Pamela, a spotlight of the book, reviews, and a giveaway. One GRAND PRIZE WINNER will receive a $50 Starbucks Gift Card!

After practicing law for many years in Houston, Texas, Pamela Binnings Ewen exchanged her partnership in the law firm of BakerBotts, L.L.P for writing. She lives near New Orleans, Louisiana. In September, 2013, Ewen’s novel, An Accidental Life, will be released by B&H Publishing Group. In addition, in September 2013, an updated, second edition of Ewen’s best-selling non-fiction book, Faith on Trial, will be released, including a new ‘User’s Guide’.


In addition to the new releases, Pamela is the author of four novels from B&H Publishing Group, including Secret of the Shroud, The Moon in the Mango Tree (a 2009 Christy Award Finalist), Dancing on Glass (a 2012 Christy Award Finalist, and winner of a Single Titles Reviewers’ Choice Award), and Chasing the Wind ( a Romantic Times ‘Top Pick’). The Moon in the Mango Tree was recently honored as winner of the 2012 Eudora Welty Memorial Award given by the National League of American Pen Women.


Pamela’s fiction writing grows out of her faith journey, which resulted in Faith on Trial in 1999. Faith on Trial , along with Lee Strobel’s A Case for Christ, was chosen as a text for a course on law and religion at Yale Law School in 2000. Pamela is also featured in the film Jesus: Fact or Fiction, produced by Campus Crusade for Christ. An updated second edition of Faith on Trial (September, 2013) includes a new ‘User’s Guide’.


Pamela is the latest writer to emerge from a Louisiana family recognized for its statistically improbable number of successful authors. A cousin, James Lee Burke, who won the Edgar Award, wrote about the common ancestral grandfathers in his Civil War novel White Dove At Morning.