The Sound of Us by Julie Hammerle Cover Reveal 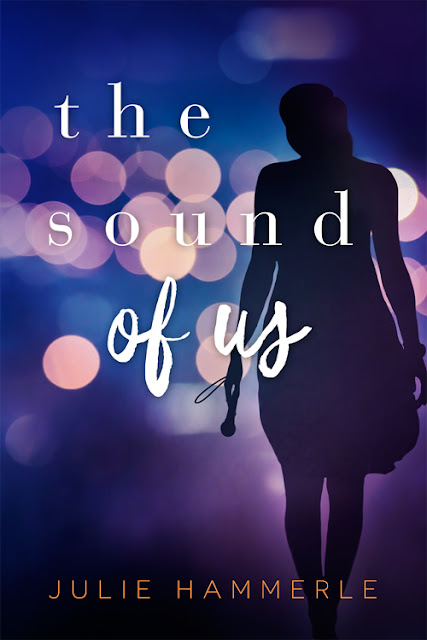 The Sound of Us
by Julie Hammerle
Release Date: June 7th 2016
Entangled Teen

@kikeronis Silver lining to having your best friend stab you in the back: you’re no longer her constant tag-along. I can kick ass here.

@kikeronis What if you meet a hot nerdy drummer who understands your soul, but res hall basement jam sessions are forbidden & can get you kicked out?

@kikeronis I, sweatpants enthusiast & perpetual chorus girl, have to be ruthless enough to win 1 of the 7 scholarships, or no music school for me.
@kikeronis Forget opera domination, I'm headed for "opera camp disaster & cautionary tale." If I don't give up either music or the guy, I'll lose both.

Excerpt:
From the music app on my phone, Ani DiFranco belts out a choice insult just as Brie bursts through my dorm room door, crosses the room, and plops a giant cardboard box on the other bed.

“I guess we’re roommates,” she says. There were a bunch of boxes in the room when I arrived, and I wondered who they belonged to. I suppose that mystery is solved.
I scramble to stop Ani from singing anything else we both might regret later and I look up just in time to see Seth Banks crossing the threshold into my dorm room, carrying another larger, heavier box over to Brie’s side.

“Hi,” he says. “Kiki, right?” He knows my name. Seth Banks somehow knows my name.
I nod, and sneak a glance at the mirror on the wall next to my bed, assessing myself against the two model-caliber people in my dorm room. I’m still wearing the cat dress. My frizzy hair is up in a messy bun, but the effect actually works with my blue-plastic glasses. I look eccentric, but artsy, which may not be the best look of all time but it is, in fact, a look.

(You’re probably wondering who my celebrity twin is. Well, there aren’t a lot of women in pop culture who have my body type, i.e. dumpy. I’m too fat to be thin and too thin to be fat. Head-wise, I have the glasses and mouse-like features of Mary Katherine Gallagher from Saturday Night Live with hair like Hermione before someone gave her hot oil help between the second and third movies.)

Brie cocks an eyebrow at me and tucks her bottom lip under her top teeth as she picks up my backpack and drops it on the ground with a perfunctory thud. I had tossed it onto the blue papa-san chair in the middle of our room after I got back from the auditions. “That’s my chair,” she says. “My. Chair.” And then she proceeds to place a six-pack of Diet Coke into the fridge—My. Fridge.—because apparently that’s how fairness works.

Brie puts her hands on her hips and surveys my side of the room, which, honestly, does look like a tornado ripped through it. I came back to our room after auditions with the plan of unpacking all of my things, I really did. But instead I felt so overwhelmed, I had to take a few minutes to listen to Ani and decompress by writing horrible, secret poetry in my journal. But the few minutes turned into an hour, turned into me skipping dinner, turned into all of a sudden it’s 7:00 and my clothes are still strewn around the floor like party guests who refuse to leave.

To prove a point to Brie or something, I grab a stack of pictures from my desk and start sticking them up on the bulletin board. I don’t really want the pictures on my wall. I don’t need them, but I feel like they’re obligatory college student falderal, and that’s what I’m pretending to be this summer, a college student. My eyes linger over the pictures as I pin them, memories that seem so distant already. High school is a million miles away, which is kind of the point of my being in Indianapolis, so, success.

About the Author
Julie Hammerle is the author of The Sound of Us, which will be published by Entangled Teen in the summer of 2016. Before settling down to write "for real," she studied opera, taught Latin, and held her real estate license for one hot minute. Currently, she writes about TV on her blog Hammervision, ropes people into conversations about Game of Thrones, and makes excuses to avoid the gym. Her favorite YA-centric TV shows include 90210 (original spice), Felicity, and Freaks and Geeks. Her iPod reads like a 1997 Lilith Fair set list. She lives in Chicago with her husband, two kids, and a dog. They named the dog Indiana.